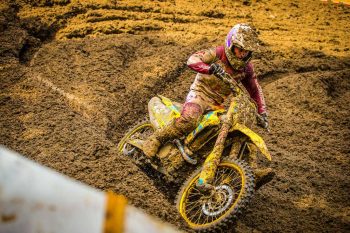 The second round of the 2020 Lucas Oil Pro Motocross Championship kicked off with heavy rain and was once again hosted by the iconic Loretta Lynn Dude Ranch for the second consecutive Loretta Lynn’s 2 National.

Following the morning rain, Pirelli riders opted to run the SCORPION™ MX32™ Mid Soft front and SCORPION™ MX Soft rear tires in both the 250 and 450 Classes to navigate the muddier than usual conditions.

JGR/Yoshimura/Suzuki’s Alex Martin raced to his best finish of the season by taking the victory in the second 250 Class moto and landing himself on the overall podium.

“It’s a good feeling to be standing back up here on the podium,” said Martin. “The track conditions were pretty gnarly all day, but I felt that I had a good pace going in both motos and I was finally able to put it all together in Moto 2. Getting a good start is huge in conditions like these and the Pirelli SCORPION™ MX Soft did a great job of getting a drive into the first turn.”

As the gate dropped on the opening 250 Class moto, Martin was quick out of the gate and rounded the first turn in second. He would quickly take over the race lead before hitting a soft spot on the track and going down. The Suzuki rider would remount towards the tail end of the field and put on a strong charge to claw himself back to seventh at the checkered flag.

At the onset of 250 Moto 2, Martin used his SCORPION™ MX Soft scoop tire to launch out of the gate and capture the Motosport.com Holeshot. Despite rainfall, Martin continued to push at the front of the 40-rider field and opened a comfortable gap over the second place rider. Martin stayed out of trouble in the difficult conditions and remained unchallenged to take a dominant Moto 2 victory with more than a full minute to spare on his nearest competitor. It marked his first moto victory since joining the Joe Gibbs Racing team and his 7-1 moto scores landed him third overall on the day.

“It was great to see Pirelli riders running towards the front all weekend,” said Nick Walton, Off-Road Manager, Pirelli. “With back-to-back events here at Loretta Lynn’s, and Pirelli riders grabbing several holeshots, I think that it really shows how capable the SCORPION™ MX Soft scoop tire is at getting traction when the conditions are soft or muddy.”

The Lucas Oil Pro Motocross Championship heads to Ironman Raceway in Crawfordsville, Indiana next Saturday, August 29 for round three.