Tickle ‘can build off’ inspiring fourth overall at Loretta’s

Runner-up in race one a positive step forward in motocross comeback. 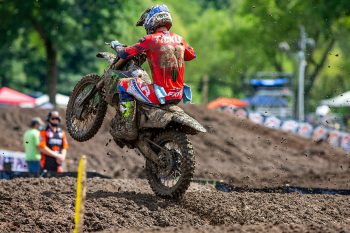 Finishing second in the first moto and then taking fourth overall at round two of the 2020 Lucas Oil Pro Motocross Championship will provide Broc Tickle a platform to build upon in his return to the outdoors.

Tickle hasn’t raced outdoors since mid-2017, but has returned this year after being suspended and landing a deal with Monster Energy Yamaha. He went 2-9 on his way to P4 for the weekend at Loretta Lynn’s 2.

“First moto was awesome,” Tickle said. “I got off to a good start and stayed clean for the most part. Honestly, just rode pretty conservative and hit my marks, tried not to make mistakes and overheat the bike and whatnot, so I was able to come home second. I feel like I could have maybe pushed a little bit more, but I was a little uncomfortable, to be honest.

“I haven’t raced outdoors in three years and the conditions, obviously for being in SoCal number one and then obviously not being behind the gate, for me was tough. In the past, the conditions have been my strong suit, so I think the experience kind of tapped in when it needed to.

“For the most part, it’s good to be back racing. I’m stoked with the crew I’m around. I’ve worked with most of the guys before, so for me it’s like a welcome home, to be honest. During the week it’s been awesome and I think we can build off this, obviously. Fourth overall, missing the podium by one point is great, but I want to be there in dry conditions too.”

After finishing 13th overall at the first Loretta’s round, Tickle’s fourth on Saturday – missing the podium by a single point – has elevated him to eighth in the 450MX championship standings following two rounds at the Ranch.