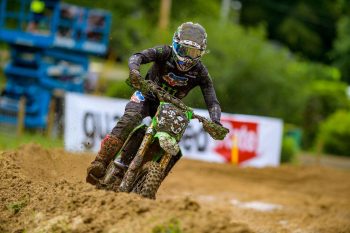 While Round 2 was at the same location, it felt like a completely different race track thanks to rain that soaked the area before and during the race. McAdoo knew that the key to getting a good finish was to start upfront and he did just that in Moto 1. He filed in just behind the leader and took over the lead on Lap 2. As he did his best to keep it on two wheels, McAdoo eventually crossed the finish line in fourth.

Moto 2 was just as treacherous and McAdoo got another great start in fourth. Using all his strength and skill, he kept it on two wheels to come around fifth for the moto and score fourth overall on the day.

“Those races are pretty intense because there are a lot of factors you have to think about,” said McAdoo. “Not wanting to go down because getting back up is so much harder than normal and picking good lines when you’re getting roosted are just a few things we think about. I was fortunate enough to get good starts, which made a world of difference today.”

As the newest member of the Monster Energy Pro Circuit Kawasaki team, Harrison has been out to prove that he has what it takes to be competitive in the deeply talented 250MX class. He bounced back big on Saturday with a great start in Moto 1 to steadily race inside the top 10 and finish the moto in sixth. He had a bit more of an uphill battle in Moto 2 when he came around the first lap outside the top 20, but despite the tough conditions still made it up to 10th to round out the day in seventh overall.

“The first moto was not bad thanks to a good start,” said Harrison. “I was able to keep it on two wheels and bring it home in sixth. I really wanted to back up that finish in the second moto, but found a sinkhole on the first lap. I can’t believe I was able to get out, but had a lot of ground to make up. So 10th in that moto wasn’t terrible, all things considered. Ironman (the next round) has been known to be muddy in the past, but hopefully we can get in a dry race next weekend.”