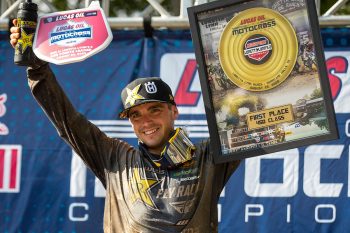 The Rockstar Energy Husqvarna Factory Racing Team concluded part two of an unprecedented two-weekend stay at the Loretta Lynn Ranch in Hurricane Mills, Tennessee, where the team rallied together to create a promising start to the 2020 AMA Pro Motocross Championship. Team rider Zach Osborne led the charge as he showcased incredible determination and heart to emerge as the 450MX overall winner at Loretta Lynn’s for a second-straight week, despite the most unfavorable of conditions and circumstances throughout the day. His teammate, RJ Hampshire, put forth a notable performance in 250MX Moto 1 to claim his first race-win of the season amidst the chaos.

450MX
For Osborne, the end result turned out to be satisfactory but the path to get there wasn’t easy for the 450MX points leader, who experienced a freak issue with his bike at the start of Saturday’s one and only qualifier, due to immense rainfall and sloppy track conditions. The team worked hard and fast to get Osborne back on-track just in time for him to secure a top-10 qualifying position from the “B” session. In Moto 1, he got off to a bad start and rounded the opening lap in 31st. He made an incredible charge through the muddy chaos to ultimately secure a top-five finish. In Moto 2, he got off to a sixth-place start and worked his way into podium contention just before halfway. Sitting close behind in second heading into the final laps, Osborne eventually capitalized on a mistake from the race leader and overtook the lead with a strong push to the checkers. Finishing 5-1 on the day, Osborne clinched the overall win with a top performance in Tennessee.

“It was a lot of turmoil to start off the day but we turned it around with a 5-1 and kept the red plate, which is really a testament to what we have as a group,” Osborne said. “Overall, it was a great salvage and a great day for myself and my team.”

It was a tough start to the day for Anderson, last week’s Moto 1 winner, who got caught in the muddy cross-fire with a crash off the start in Moto 1. He re-mounted at the back of the pack and began working his way through the field until another crash set him back once again. He came back strong in Moto 2, rallying his way from a 13th place start all the way up to an impressive fourth-place finish in the moto. With 27-4 scores, Anderson salvaged a top-10 overall with ninth-place for the day.

“The weekend was kind of rough but the second moto went much better and I was able to work my way up to fourth,” Anderson said. “I’m ready to move on to the next round and keep pushing.”

For Wilson, it proved to be challenging day in the mud. In Moto 1, he got off to a fourth-place start but he went down on the first lap and battled his way up to just outside the top-10. He ran into an issue late in the race, ultimately finishing 20th. In Moto 2, he captured a top-10 start and maintained a comfortable pace to finish 11th in the moto.

“It was a very tough weekend with the muddy conditions and really hard on the bikes so I tried to slow the pace down in Moto 2 and save the bike as much as I could,” Wilson said. “I’m looking forward to some dry conditions where I can actually show what I can do. It’s been tough but we’ll keep plugging away.”

250MX
In Moto 1, Hampshire got off to a top-three start amidst a muddy mess and he diligently worked his way into the lead by lap four. He went on to lead 12 of the 15 laps to secure his first moto-win of the season by almost 10 seconds. In Moto 2, Hampshire spun off the gate and ended up coming into contact with another rider and went down in the first corner, pushing him back to 30th on the opening lap. He went to work picking his way through the field where he reached as far up as eighth but he was unable to complete the final laps as his bike fell victim to the treacherous conditions. With 1-18 scores for the day, Hampshire salvaged sixth overall to sit fourth overall in the 250MX Championship Standings with one moto-win and a pair of podium finishes behind him.

“It was a brutal track today but I was pumped to hold on in Moto 1 to get my first moto-win with the team,” Hampshire said. “After going down in the first turn, I put on a charge and climbed as much as I could but the bike ended up letting go with a lap and a half to go. It’s not the final result we wanted but I’m looking forward to battling up front some more this season.”

Rookie Stilez Robertson made the best of the adverse conditions as he raced his way to a career-first top-10 overall in the 250MX class. Robertson got a top-10 start in Moto 1 and he shuffled back-and-forth throughout the moto to secure 12th. In Moto 2, he captured another top-10 start and made progressive moves forward to claim a career-best seventh-place finish to round out the day with eighth overall in only his second professional race.

“Overall, it was a pretty good day but it was brutal out there, probably the muddiest track I’ve ever ridden,” Robertson said. “The first moto I made too many mistakes and had too many little tip-overs. The second moto, I rode pretty good – I didn’t make that many mistakes, stayed on two wheels and kept my bike running.”

Jalek Swoll missed Round 2 due to a mild concussion sustained during the first 250MX moto last Saturday and he hopes to be back to racing soon.