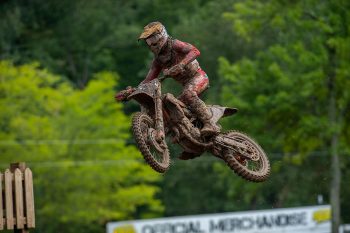 Red Bull KTM Factory Racing Team’s Marvin Musquin made big strides on Saturday as he stepped into second overall in the 450MX championship with a solid podium finish at Round 2 of the 2020 AMA Pro Motocross Championship at the Loretta Lynn Ranch.

With back-to-back rounds taking place in Hurricane Mills, Tennessee, the track couldn’t have been any different as heavy rains came through and created a muddy mess for Saturday’s racing. The qualifying schedule was consolidated into one session for each group and Musquin made the most of it by claiming pole position aboard his KTM 450 SX-F FACTORY EDITION.

The track saw additional rainfall before the start of first motos, making for unpredictable track conditions in 450 Moto 1. Musquin got off to a decent start where he sat just outside the top-five on the opening lap. He battled around the top-five until he went down in the mud, forcing him to make a mid-race pit-stop in order to change out his gloves. Musquin was able to get back going and ultimately work his way up to an eighth-place finish.

In Moto 2, Musquin shot off the line to narrowly miss the holeshot as he fought Max Anstie for the early lead. He eventually settled into second and maintained that position until lap nine, when Zach Osborne came into the mix. Musquin tailed Osborne for a few laps before ultimately making the pass on Anstie for second. From there, he put on an impressive last-lap charge to catch Osborne in the final turns, crossing the finish line only two seconds shy of the race-win.

Musquin: “I’m pumped to be back on the podium for the second race, it’s been a while. The conditions were tough, so it was my goal to be up front battling and I was able to do that in the second moto. I would have liked to be more consistent in both motos but that’s racing, everybody was having issues and crashing. Also, you have to save the bike and my bike was running well today, I had no issues.”