450MX and 250MX to feature in two-hour Pro Motocross broadcast. 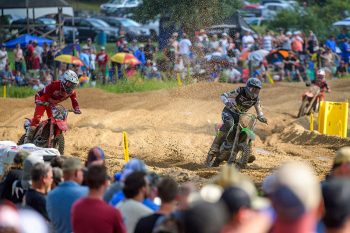 Saturday’s second round of the 2020 Lucas Oil Pro Motocross Championship at Loretta Lynn’s will be showcased live on NBC Broadcast Network.

A two-hour broadcast will bring the action into millions of homes, showcasing the second motos of both the 250 Class and 450 Class, beginning at 1:00pm PT/4:00pm ET.

“The opportunity for each of our incredibly competitive and talent-rich divisions to be showcased live on NBC, potentially reaching millions of viewers across the country, is incredible. It also adds yet another layer to the growing legacy of Loretta Lynn’s Ranch.

“This has been a special place for the sport of motocross for nearly 40 years and now viewers from all over the US will have the chance to see why it’s such a beloved venue.”

Kicking off the coverage on NBC will be the 250 Class, where Monster Energy Star Yamaha Racing’s Dylan Ferrandis will look to open the season with consecutive victories and further extend his lead in the championship standings.

Bringing the broadcast to a captivating conclusion will be the 450 Class, where a deep field of talent has already displayed how competitive this season is sure to be.

While Rockstar Energy Husqvarna Factory Racing’s Zach Osborne will look to build off his first career win one week ago, reigning three-time champion and Monster Energy Kawasaki rider Eli Tomac is sure to contend for his first victory of the season.

First motos of Loretta Lynn’s 2 will also air live on MAVTV Motorsports Network, beginning at 11:00am PT/2:00pm ET. Additionally, an encore presentation of the second motos will air via tape delay on NBC Sports Network at 7:30pm PT/10:30pm ET.

All the coverage can also be streamed live via the ‘Pro Motocross Pass’ on NBC Sports Gold.