How the official team entries performed as the Pro Motocross gates dropped.

After months of uncertainty and schedule changes, the 2020 Lucas Oil Pro Motocross Championship made a welcome return on Saturday for the first-ever round at the home of amateur racing, Loretta Lynn’s Ranch. Despite people’s reservations that the track would be too tight and basic for the pro racers, it threw up one of the best days of racing witnessed in some time. After a strong start to the outdoors, MotoOnline rates the top-performing rider from each of the factory teams at LL1. 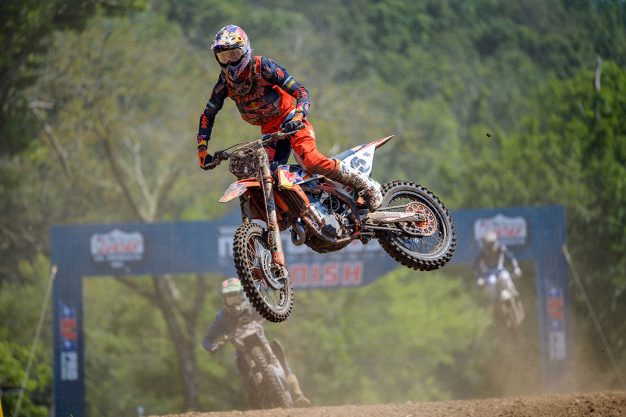 Rider: Zach Osborne (Rockstar Husqvarna Factory Racing)
Rating: A
Rundown: It’s amazing what confidence and self-belief can do. After a couple of years filled with injuries and mixed results, Zach Osborne is in the form of his life right now. Following up his breakthrough Supercross win at the final round at Salt Lake City 7, Osborne claimed his first-ever overall motocross victory on a deceptively technical Loretta Lynn’s circuit. In the opening race he weaved his way from ninth to third position, then straight-up passed defending champion Eli Tomac and took off after his team-mate and race winner Jason Anderson. Osborne finished second, then backed it up with great start in moto two, with just Adam Cianciarulo ahead of him. AC crashed spectacularly soon afterwards and, from there on, Osborne could enjoy the clear air and dominated the remainder of the race. No doubt about it, Zacho is ready for 2020.

Rider: Eli Tomac (Monster Energy Kawasaki)
Rating: B+
Rundown: A B-level rating might seem a bit harsh for someone who made the podium, but considering how much of a title favorite Eli Tomac is, we’ve got to hold him to a higher account. The Colorado native started strongly as he gave chase to a flying Anderson in the opening race, but the second half of the moto saw him fade to seventh as he struggled with a suspension set-up what wasn’t prepared for the technical, rutted Hurricane Mills track. A few tweaks during the break saw a much more competitive Tomac for moto two, as he muscled his way into second place by lap nine, then put in a hard challenge for Osborne’s lead. A few mistakes in the ruts during the final laps put paid to his push for victory, but any concerns raised about his performance earlier in the day were quickly put to rest.

Rider: Marvin Musquin (Red Bull KTM)
Rating: B+
Rundown: Having not lined up behind a starting gate for almost a full year, Frenchman Marvin Musquin was a bit of an unknown entity entering the weekend. He missed the entire Supercross championship with a knee reconstruction, but he certainly hasn’t let the down-time affect his fitness and form. The Red Bull KTM racer worked his way from 11th to fourth in the opening race, overtaking Tomac on lap 15 and his team-mate Cooper Webb on the final lap. The second outing was a much more sedate affair as he circulated in fifth for the vast majority of the race and did his best to keep out of trouble. Marv will be satisfied to get a first solid performance under his belt and will be keen to improve at the second outing at Loretta Lynn’s this weekend.

Rider: Justin Barcia (Monster Energy Yamaha)
Rating: B
Rundown: There’s something about series openers that makes Justin Barcia come alive and the hunger was certainly there at the Ranch on Saturday, especially in the opening 450 moto. After a respectable start, Barcia found another gear in the second half of the race as he caught and passed Cianciarulo, then both Tomac and Webb to hold down an impressive third-place result. An average start to the second race cut his work out for him, but he managed to hammer his way past a staggering 14 riders in two laps. From there his progress stalled, although he hunted down Webb for the second time that day on his way to seventh. It’ll be interesting to see if Barcia can bring the same intensity to the races every weekend from here on out. Rider: Chase Sexton (Team Honda HRC)
Rating: B+
Rundown: We’d been hearing all off-season that Chase Sexton had taken strongly to the Honda CRF450R, but no-one expected the performance the 450MX rookie threw down at Loretta Lynn’s on Saturday. Sexton caused a stir by qualifying fastest, then backed that up with impressive rides in both motos. His 13th result in the opening race doesn’t tell the story how he battled from 11th to third in two laps, where he stayed for half the race before a brace of crashes on the rutted circuit saw him fall to 13th. In the second outing, the 20-year-old grabbed a much better start and was second before getting freight-trained by Tomac, Anderson and Musquin. Sexton hung onto the back of that group and got back by the latter two to score a race podium in his debut appearance.

Rider: Joey Savatgy (JGRMX Yoshimura Suzuki)
Rating: B-
Rundown: The JGRMX team would’ve been in raptures when their two riders, Joey Savatgy and Fredrik Noren, led the rest of the 450 pack through Loretta’s first turn in moto one. It was Savatgy’s first race back after breaking his heel at the AUS-X Open last year, but after jumping to the front of the pack in the opening race, he was slowly gobbled up by the front-runners and eventually finished ninth. In the second outing, he again scored a pretty decent start, but faded back to 11th. Savatgy reflected on his day as ‘sub-par’, but there are still a bunch of positives to take from his first race back in 10 months.

Rider: Dylan Ferrandis (Monster Energy Star Racing Yamaha)
Rating: A+
Rundown: We only chose to include one of the 250MX teams, but man, Dylan Ferrandis certainly set the standard last weekend. Even though he had never visited Loretta Lynn’s before, he certainly didn’t let that phase him. His qualifying time was a staggering 3.6 seconds quicker than the next fastest – Jeremy Martin (Geico Honda) – and he dominated both motos. He led every lap of moto one to finish 20 seconds ahead of Martin, then quickly sliced his way to the front of the second race to win by a 13-second margin over hard-charging RJ Hampshire (Rockstar Energy Husqvarna). If this is what we can expect from Ferrandis for the rest of the series, every other rider in the paddock should be very, very concerned.