Troublesome back forces Webb out of Pro Motocross season 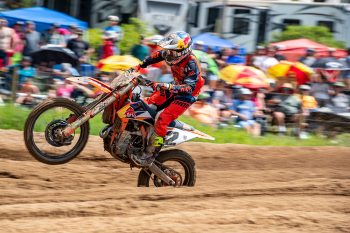 Red Bull KTM has confirmed Cooper Webb will miss the remainder of the 2020 Lucas Oil Pro Motocross Championship after aggravating existing back injuries at Loretta Lynn’s in practice at the opening round last Saturday.

Webb has battled ongoing back issues since crashing heavily in the Arlington round of Monster Energy Supercross – including another incident last month – and suffered from the effects on his way to seventh overall at the outdoor opener.

“About a month ago I had a practice accident where I re-injured my back in the same areas as Dallas,” Webb explained. “We got it checked out and at the time it was two bulged disks. We were able to manage the best we could with riding and training the last month, with good and bad days.

“Well, Saturday during practice two I had a crash that upset my back and as the day went on it got worse and worse, with moto two being a disaster. [On] Monday I got checked again and we found that I have three herniated disks in my back, as well as a torn nerve and bone contusions on my sacrum and both iliac joints.

“With that being said, I need to rest my back and doing the proper procedures to make sure my back is fine for the rest of my career. Thank you to all my sponsors for the continued support. I’m pissed off, but in racing s**t happens and I will be determined as ever in 2021 to get back on top.”

Red Bull KTM team manager Ian Harrison added: “We are very proud of the way that Cooper has handled this situation and the heart that he has shown to even finish out the SX season and line up for the opening round of MX after such a big crash earlier in year,” said “We understand how disappointing this is for him but the whole team is here to support him and do what is best for him long-term to be healthy.”

Despite his injuries, Webb was able to press on in the final rounds of his 450SX title defence, ultimately finishing runner-up to Eli Tomac (Monster Energy Kawasaki) following the seven-straight rounds in Salt Lake City.The team will continue to field Marvin Musquin outdoors, who had missed Supercross through injury.