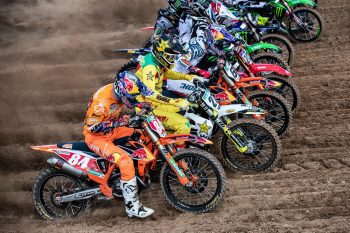 Turkey, Russia and Portugal have been dropped from another heavily-revised 2020 MXGP World Championship calendar, with a series of triple-header events scheduled to complete much of the season.

The decision of Infront Moto Racing come due to elevated COVID-19 travel restrictions, Turkey was scheduled for 6 September, while the Portuguese and Russian rounds were listed as TBC on the previous schedule.

All three events will be postponed until next season and, instead, the next three rounds will be held at a single location in a similar structure to the successful triple-header at Kegums completed last week. The first event will be 6 September, followed by 9 September – another mid-week race – and 13 September.

Additionally, MXGP will head to Mantova in Italy for another trio of races on 27 September, 30 September and 3-4 October. Further changes will then see the world championship head to Pietramurata for three-straight events on 1 November, 4 November and 8 November.

That will mean that in addition to Latvia and Lommel, scheduled for October, that were already due to be hosted as three rounds at the same venue in succession, there will now be three triple-header rounds in Italy during the 2020 season.

Organizers have indicated that the MXGP of Patagonia-Argentina to be held at Neuquen remains part of the calendar as TBC for the moment, depending on the ongoing national conditions due to the coronavirus pandemic.