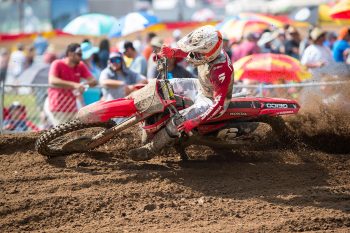 The global pandemic delayed the 2020 Lucas Oil AMA Pro Motocross campaign for three months, but as the nine-race outdoor season kicked off on Saturday, many things felt familiar. Loretta Lynn’s Ranch, home to the famous AMA Amateur National, pitched in to host a pro race for the first time. Most riders grew up racing the track as amateurs, and even the weekend rain seemed normal, with summertime thundershowers a staple of racing at Loretta’s.

Time didn’t cause old feelings to fade, especially not for GEICO Honda’s Jeremy Martin, who jumped back on the podium with 2-3 scores in his motos and third overall. Martin missed most of 2018 and all of 2019 with a major back injury.

“The day was not bad,” said Martin. “It felt really good just to be back at the races and to have that goal and to line up with the boys and just try to have that competitive drive to try to beat everybody. I qualified second fastest. I struggled with my starts today. I knew that start was slippery, but I didn’t expect it to be like Washougal slippery. So, I didn’t get out of the gate the best in both motos but I just tried to be tough and suffer through that heat and get up to the front. I was getting on RJ [Hampshire, second place] in moto one, and then he unfortunately hit a lapper. RJ had nowhere to go and I got a blessing from him. Then in moto two, I just tried to be smart and end it with a third and get a podium the first round. RJ [second place] was so far gone at that point.”

“It’s been pretty much two years since I’ve raced an outdoor national,” said Martin, who won the 250 National Motocross Championship in 2014 and 2015. “I’m adjusting to some things, as far as when it gets really hot out. The hardware in my back, I get pretty hot. So that’s different for me. I used to welcome the heat pretty gnarly and stuff. So, I do notice a little bit of a difference there with the instrumentation in my back. Just looking forward to this series. I love the great outdoors. I love the grind. We’re doing a lot of racing in a short amount of time, and I think that’s pretty sweet too.”

The GEICO Honda team is packed with five riders for pro motocross, but beyond Martin’s solid day, everyone had to fight through ups and downs. Jett Lawrence, entering his first full motocross season, battled back to 6-7 moto scores and sixth overall. Lawrence raced the track as an amateur in 2019 but was immediately tripped up by a change in the finish line location for the pro race, and the difficult track conditions due to the rain and mud.

“First practice was not too bad, but I didn’t know where the finish line was so I probably didn’t time my laps the best in that, but the second practice was better, third in that and fourth overall,” said Lawrence. “First race started off terrible because I chose to run a paddle tire which didn’t work good on dry hard pack dirt, but I was able to tuck around the inside in the first turn. I just ended up over riding the track and made mistakes and then crashed so that put me back to tenth I think, I slowly made my way back to sixth. But I felt like I was going to throw up! Second race I had the right tire on but just had too much revs and spun in the gate and this time I wasn’t able to tuck around the inside in the first turn. So, I was like 25th. I was pretty happy how I rode in this one ‘cause I rode really smart and didn’t try to rush anything. I just made my way up in the top 10. Tried to make a pass for sixth on the last lap but couldn’t make it happen. Sixth overall for not getting good starts and riding bad in the first one was still pretty good.”

Carson Mumford was making a debut of sorts, as he raced two pro motocross events last year after the Loretta’s Amateur National but did not race any supercross events this season. The rookie found himself up front almost immediately in the first moto, surprising even himself.

“My weekend was crazy!” said Mumford, who ended up 13th with 12-15 scores. “I learned so much, I felt like I had so many different circumstances thrown my way for one weekend with it being muddy first practice and the track being insanely rough but I’m happy with how everything worked out. The first moto I was just outside the top five. Then by about 20 minutes I was getting pretty tired and really was kinda shocked that I was still in sixth. I should have just focused more on going forward because when the mistakes started coming I was almost crashing every corner but somehow stayed on two wheels. That just took so much energy, and I was thinking about it way too much, and I went all the way back to 12th. Rode a little different in second moto but I was further back the whole time. Ready for next weekend after everything I learned here.”

Jo Shimoda is another young rider in his first full season. He also was confused by the new location of the finish line, and also suffered from bike problems in his first moto. He went 37-11 for 16th overall.

“Yeah I felt pretty good in the first timed qualifying but I missed the finish line, I thought it was same as amateur day,” said Shimoda. “The second timed qualifying I was riding not so good and struggling on the track, qualified 15th. Race 1 I started around 15th and made some passes but couldn’t finish my race due to a bike malfunction. That put me all the way on an outside gate in moto two, which didn’t let me have good start. I was able to catch up to 11th place by the end.”

The biggest disappointment of the day had to be Hunter Lawrence, considered a title threat, but suffering from bike problems as soon as the season began. In a freak occurrence, a first-turn crash damaged the kill switch on his bike, which led to a last-place finish and then the last gate pick for the start of the second moto. He went 40-14 for 17th overall.

“First moto really just wrecked our day with the DNF,” said the elder Lawrence brother. “Being gate pick 40 for the second moto, I was going okay in the second moto until [Mitchel] Harrison took me out. I then just pushed too hard for what the track conditions were and crashed again. Then it was survival mode, the track was really weird and just so funny, like, you couldn’t push too hard on it and slower was almost faster! Looking to redeem myself big time this weekend.”

The familiar turf of Loretta Lynn’s will feel even more familiar now, because the track also hosts round two of the championship this upcoming Saturday.