Overall round winners Osborne and Ferrandis on Saturday's victories.

The first-ever Lucas Oil Pro Motocross national at Loretta Lynn’s was a special day for overall winners Zach Osborne (Rockstar Energy Husqvarna) and Dylan Ferrandis (Monster Energy Star Yamaha), standing atop the podium in 450MX and 250MX respectively. Both riders spoke to the media post-race via Zoom press conferences and here’s what they had to say. 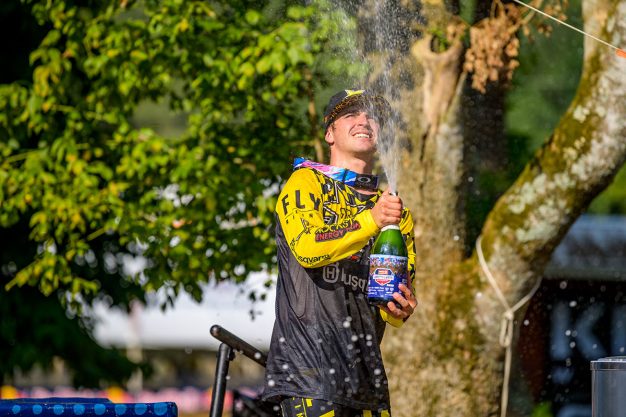 Zach, talk about your day. Congrats on the first win. You’ve been building a lot of momentum, it seems like, going from Supercross and carrying it right over into outdoors, especially considering you came off an injury that really sidelined you for an extended period.

Honestly, I woke up a little bit on the wrong side of the bed. I was a little bit not in the mood for it this morning, but the track was really good when we went out. Right off the bat I kind of felt the flow and was able to get into the mindset pretty quick. So, for me, it was just an execution thing. I knew that I needed some good starts, which the first one was not great – I was around maybe 10th or so, then the second one obviously with the holeshot was really, really good. It’s a great way to start because with this whole thing being a pretty fluid situation, we never know when the end’s going to be as far as the series and everything goes. I knew that it was important to strike early and, even if I didn’t win today, take as many points as I could and try to build some momentum. To get the win and take the red plate is really awesome.

I know one of the biggest hurdles going from 250s to 450s is getting over that ‘jersey shock’ – the names on the back of the jerseys – and realizing you belong there. You were dominant in 250s and, now you move up, you’ve won two in a row with the last Salt Lake [Supercross] and now this one. Are you getting to that point where you’re starting to feel like every time you line-up, that you’re a contender for a championship, wins, etc?

Yeah, for sure… It’s coming. It’s hard to make that transition and, obviously last year I was hurt for half of the Supercross season and missed a lot of time on the bike. Then the Salt Lake thing definitely helped me a lot, as far as just overall confidence and a sense of belonging, like you said. So, now I definitely feel I’m in more of a position where I’m not panicking, I can go out there and kind of ride the way I train and ride within my means – it’s more just straightforward racing and that’s what I feel like.

I think at some point all three of you guys have won titles at Loretta’s. What was it like coming back there and how did it work as a pro-level track?

Yeah, I thought it would be a good track. You know, there were a lot of concerns about it being too small or too narrow, this, that or the other, but it shaped up pretty gnarly. Some of the ruts were, the one before the Ten Commandments out of that left-hander was like 200 feet long. The thing was forever to get to that corner and, like Eli said, had they not gotten so deep trying to have a press day yesterday, I think it would have been a better race track, but it did shape up pretty gnarly and I think next weekend is probably going to be even better with what they learned this weekend.

That pack you were in in the first moto, there were like nine of you going back and forth. What was that battle like? Is it different the first moto of the year when no one quite knows where everybody stands?

Yeah and, also today, it was what I call a status quo track, where you’re not going to go faster than, say a 1m57s, but two mistakes will put you at a 2m04s before you can even know what happened, so that made it even more tough because the battle was quite intense. There was a lot of guys, like you said, and also you’re trying to not make mistakes while still going at a decent rate of speed. It was a techy track in the first moto, for sure.

It looked like you were the only rider that was by the mechanics area where you would step-on, step-off before that little tabletop. Do you think something simple like that was a contributing factor to your performance?

I actually watched a ton of motos last week from the amateur race and just kind of did some research. I saw some guys doing it last week and then this morning I saw some guys doing it in the 250 practice. I just didn’t like that triple turning and, also when you triple, you get into that bump and then you’d go up the face and it was just kind of a lot of energy, so I felt like if you go scrub and then jump on, jump off, or double double or whatever you want to say, I just felt like it was a big energy saver for me. It was more easy for me and more consistent than trying to triple. Those ruts on the face were quite gnarly and AC crashed there big on the first or second lap of the second moto… I just felt like it was a safer option.

You seemed to excel when the track was getting worse and worse throughout the motos and as a bit of a smaller guy with a more unique riding style, what do you attribute to feeling comfortable in those type of conditions?

Growing up on the east coast, mostly. That’s kind of the stuff that I rode every day as a young kid and that’s where I’m most comfortable. Also, when I was in Europe, the deep rutted tracks were my best tracks. It kind of just so happened to be and I guess that was one thing that I leaned on when I came back here, was you’re good in the deep ruts or whatever, so it’s just a confidence thing more than anything, I believe. I would say I tend to struggle more on the really hard stuff with a lot of throttle control, that’s just not my style at all and that’s not how I ride, so today kind of suited me down to the ground. 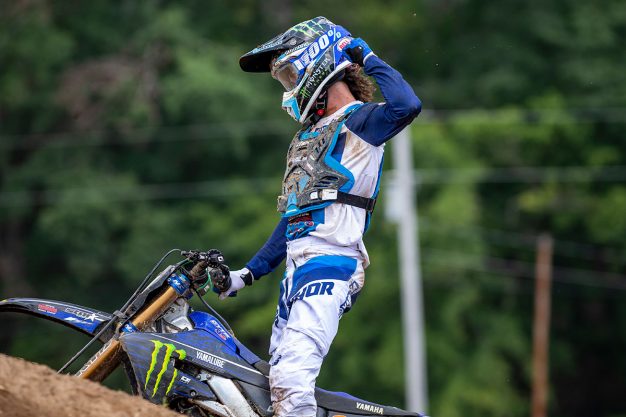 You obviously had a great day at Loretta’s. You looked comfortable on a track that a lot of guys definitely were challenged on and everybody was talking about how difficult it was. You seemed to make it look easy somehow. Can you just go through your day, that 1-1, and how it was for you?

Yeah. Like you said, for me, it was a good day and I feel great on the track. And I think it’s because we really focused on the last past week to work on a difficult track, like late, late in the afternoon. And when the track was really rough in practice. And so when we arrived here at, at Loretta Lynn’s, the track was really similar of what we got some time at the training at the end of the day. So, I think that’s helped a lot and, yeah, I just work with the others, since the Supercross season is done, I work really hard on the bike and on the setting of the bike and then physically and on the technique also a lot. And that was just a good day. I feel like myself, I was at 100 percent of what I can do and it was just the perfect day for me.

Were you surprised at all to be the fast qualifier because pretty much every single rider had raced that track except you?

No, it was not a surprise. Like I said before, the track was pretty different, I think from what everybody rode on as an amateurs and, I mean, I looked at track the day before, like I always do on a race and yeah, the practice give enough time to learn the track and to make enough to have a good lap. So, I just felt great since the first lap on the track and to make the best lap in practice was more because I was feeling really good and I had the good set-up of the bike. This was more important than knowing the track perfectly, so I think the condition were very new for everyone and especially in practice was really muddy. I’ve rode new track in the past and I kind of know how to deal with that.

Starts were pretty good in both motos, even the second one, I think you just got blocked by somebody, but I don’t think you were bad out of the gate. Is this something, have you figured something out and it’s going to be like this in every moto or do you just have a good weekend, as far as starts?

No, we always want to improve on starts and I feel like the last race, the last couple of Supercross, was good for me in the start. And then, yeah, just repeat what I did on Supercross and it was great, so now we improve a lot on that and yeah the confidence also helps and yeah, for sure. I’m going to try to get the holeshot every moto now [laughs].

You said at the podium that you would like to go for a perfect season. Did you mean 18 motos or do you mean just winning Supercross and motocross titles in the same year?

Yeah, I figured out after that, that maybe a confusing a little bit [laughs], but for sure, the perfect season would be to win the Supercross and outdoor title – that would be the perfect season for me. And then if I can win every race, that’s for sure more perfect, but no, the goal is to be smart and focus on the championship and win this 250 outdoor championship.

Obviously you’re aware of the talk that you probably are the guy to beat in the 250 Class season – a lot of people probably have the expectation that you’re the title favorite – so do you approach the season any different or is it business as usual?

I don’t know… It doesn’t feel different than usual. I think the Supercross season was more difficult to manage the expectation, because I was riding with number one plate and so everybody expects me to win. That was a little bit more pressure and, yeah, I managed to do well, so now it is just doing the same thing. I mean, I came to Loretta’s with the goal of being the best I can, not with the goal of being number one or the one that everybody look at. I just do my thing and yeah, like say, ride the best I can, that’s all. Now, for sure, we’re wearing the red plate, so gives a little more pressure, but yeah, the Supercross gave me a lot of learning and yeah, now I feel okay with that. It’s not a big deal.