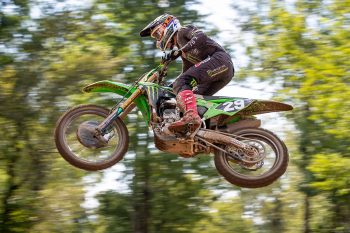 Monster Energy Pro Circuit Kawasaki’s Cameron McAdoo started the Pro Motocross season off inside the top 10 with a seventh-place overall at the first-ever Loretta Lynn’s National. New teammates Mitchell Harrison and Darian Sanyei had solid moments, ultimately scoring 15th and 18th overall, respectively. The riders had to deal with changing conditions throughout the day as the area experienced torrential downpours throughout the week leading up to the event.

It has been a long time coming for the riders to finally see a gate drop and it was a day of learning for the team. On the Moto 1 start, McAdoo started 10th but had an issue on Lap 2 that dropped him down to 18th. He regrouped and started making his push to the front and was able to get back into the top 10 to finish ninth. Moto 2 was much better for McAdoo who started eighth and kept it steady in the top 10 to finish sixth. His 9-6 scored him seventh overall on the day.

“The ruts were pretty crazy and each time you went out it felt like a different track,” said McAdoo. “It was a lot about managing but also wanting to push forward. It will be nice to be able to come back and try it again next week to see if we can do even better.”

Having minimal time on the Kawasaki KX250, Harrison looked very comfortable on the machine throughout the day. A solid eighth-place start helped Harrison showcase his speed near the front, eventually battling for fifth before a small mistake made his bike stall and took some time to get it going again, resulting in 23rd that moto. Harrison put Moto 1 in the rearview mirror and bounced back for a great Moto 2 result where he finished in the top 10 in ninth. His 23-9 moto score placed him 15th overall.

“Without that mistake, I was going to be able to put it in the top 10,” said Harrison. “It’s such a bummer, but I also look at it as a positive that I know my speed is there and I just need to minimize the mistakes. I am so thankful for the opportunity and I want to showcase how great this bike and team really is.”

Sanayei started the day with a 12th-place start in Moto 1. He went down to 18th at one point in the race, but pushed hard to make up spots, finishing the moto in 14th. His start in Moto 2 was even better in 10th and was in the top-15 before an issue forced him to retire early, scoring him 34th in that moto for an 18th overall score.

“It wasn’t the day I had hoped for to start the season, but we have some positives to take with us into next week,” said Sanayei. “The track was pretty rough and I think I’ll be able to manage it a little better next week, knowing what to expect out.”