Potential there for Red Bull KTM rider in opening motocross round. 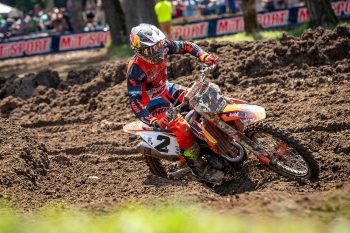 Ongoing back problems following his crash in the Arlington round of Monster Energy Supercross continue to trouble Cooper Webb, who will undergo further evaluations this week in order to be fit for Loretta Lynn’s 2.

Webb was strong in the opening Lucas Oil Pro Motocross encounter of the year to claim fifth after running inside the top three for some time, but had to settle for eighth in the second moto after jarring his back in the early laps.

“It was a very up and own day for me,” Webb said after claiming seventh overall. “Practice went well and I was feeling good heading into the motos, but I was riding pretty tight, so I just kind of lost my flow about halfway through the first moto.

“The second moto, I had a bad start and on about the fourth lap I landed really weird and jammed my back, so I’m not sure what’s going on, but I was in a lot of pain for the rest of that race. I’ve been dealing with a pre-existing back issue from Dallas, so I’m going to get it looked at this week so I can be ready to go next Saturday.”

Webb was sixth overall in last year’s 450MX championship standings, picking up his lone victory via a clean-sweep at the Spring Creek National and then missing the final two events after injuring his knee at Unadilla’s 10th round.