250MX podium on early return a deserved result for Hampshire 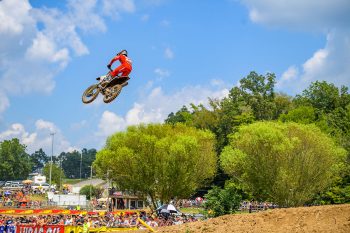 Scoring a podium result on return from knee surgery less than five months ago marked a phenomenal performance from RJ Hampshire in the 250MX opener at Loretta Lynn’s, charging to second overall on Saturday.

Hampshire was forced to miss the final stages of Monster Energy Supercross after opting to undergo an operation to repair a torn ACL sustained in December. The series’ early restart at Salt Lake City was unexpected when he had surgery.

“I truly believe that once you just set your mind to something and you tell yourself it’s going to happen, your body is going to believe it and you’re going to end up making it happen,” Hampshire said. “So that’s where I was. Whenever I found out I was going to miss Supercross, I was pretty bummed. I was bummed for myself and bummed for the team, being a new team, a new rider to them.

“They expected a lot out of me and I kind of felt like I let them down pretty bad for Supercross, so I was set on making this outdoor season and, not just making it, but being competitive. Pretty sure I just proved that I’m here to battle and be competitive and not have any lack of strength in my knee. I’m not going to lie, it’s a little sore right now, but it’s kind of expected after an outdoor like that.”

Hampshire said it was difficult to set expectations going into the outdoors, but was confident he would be competitive. Now, his target is to continue fighting amongst the top positions as his fitness continues to elevate into the season.

“It’s kind of hard to set expectations,” he explained. “I know what we’ve done the last four months since my ACL. Like I said, I wasn’t coming here to not be competitive. Realistically, I haven’t really been a podium guy every weekend, so that was my goal coming in. We’re going to be in this every weekend, fighting for the top if we can – I think that’s kind of what I did today.”