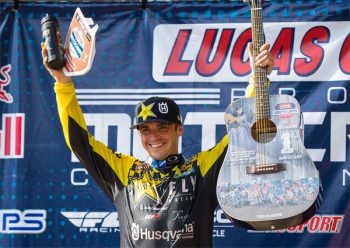 Following a lengthy delay in the 2020 race schedule, the nine-race championship finally got underway on Saturday at the legendary Loretta Lynn Ranch in Hurricane Mills, Tennessee, home to the largest AMA Amateur National Motocross Championship in the U.S. and a familiar place for many of the team’s riders and crew. Heavy rainfall on Friday made for sloppy track conditions in the morning but the sun came out and dried things up to create a rough battleground for the season opener.

450MX
Osborne, the third-place qualifier, got off to a top-10 start in Moto 1 and he worked his way into the top-five early on. He continued to put on a charge through the first half of the race, where he eventually made the move for second on lap 12. With six laps to go, Osborne chased after his teammate, Anderson, where he finished 4.9 seconds back for second-place. In Moto 2, Osborne shot off the line to capture the holeshot and settled into second for the first two laps before powering his way into the lead on lap three. After flawlessly leading 16 of the 18 laps in Moto 2, Osborne went on to take the moto win and put a stamp on the overall victory with 2-1 finishes.

“I’ve worked really hard to come back from my injury and to be here on this podium I’m blessed and so grateful to the people that have put this together to let us go racing in a very uncertain time,” Osborne said. “I knew we had a racehorse when we came here today because it’s the bike I finished with at Indiana last year and when a team brings you a bike like that, it’s hard to not do it justice.”

Anderson came out swinging in Moto 1 as he quickly turned a third-place start into the race lead on the opening lap. He pushed hard to create a comfortable gap over the rest of the field as he went on to lead all 18 laps for a clean sweep in the first moto. In Moto 2, he once again put himself in a favorable position off the start as he battled inside the top-four early on. He charged into second by lap three and battled inside podium contention for the better part of the race. With about five laps to go, Anderson got caught up in lapped traffic and lost a few positions to ultimately finish sixth in the moto. With 1-6 moto scores, he was able to secure an overall podium with second-place on the day.

“I feel like my pace was good in the second moto but my arms pumped up and I was headed back with four to go,” Anderson said. “All-in-all, I’m out here and I’m on the podium so I can’t be too bummed. I’m excited to get out here next weekend and try to redeem myself.”

In Moto 1, Wilson started around 15th and he battled his way up to finish 12th. In Moto 2, he got off to a better start but he collided with another rider on the opening lap and he was forced to come from behind to ultimately finish ninth. With 12-9 finishes, Wilson secured a top-10 overall at the season opener.

“I’m obviously not very happy with the overall result but that was a good little wake-up call to keep pushing,” Wilson said. “The conditions were very tough and rutty today and the class
is stacked right now so I’m just going to have to keep pushing and it will all happen.”

250MX
In his first race back from knee surgery, RJ Hampshire let his presence be known as he battled up front all day long. In Moto 1, he got off to a third-place start and quickly worked his way into second by the end of lap four. He dropped back to fourth for a few laps before climbing his way back to finish on the podium in third. In Moto 2, Hampshire got a second-place start and he charged his way into the lead on lap five. After leading for two laps, Hampshire got overtaken by another rider and from there, he maintained a solid pace to ultimately finish second in the moto and second overall for the day with 3-2 finishes.

“I wish we could have gotten a win but that felt good,” Hampshire said. “I tried to hang on but Dylan was riding really good and I just had to settle in otherwise I would have been on my head. I’m happy to be up here, thankful to be here and ready to go for next weekend!”

It was a tough start for 250MX class rookie, Stilez Robertson, who emerged from his professional debut with 22nd overall after succumbing to a race-ending pileup in Moto 1. In Moto 2, Robertson began just outside the top-20 and he battled all race long to ultimately finish 17th, scoring his first points in the pro division.

Jalek Swoll also experienced issues in Moto 1 after getting landed on by another rider in the “Ten Commandments” section during the opening lap. He eventually re-mounted and rode his way through the field to finish 21st. However, Swoll and his team made the decision for him to sit out for the rest of the day due to injuries sustained in Moto 1.