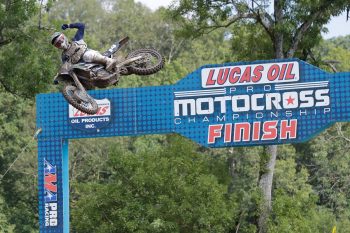 Back-to-back 250SX West Champion Dylan Ferrandis launched his campaign for the 250MX crown with a dominant win in both motos at the Lucas Oil Pro Motocross season opener at Loretta Lynn’s Ranch in Hurricane Mills, Tennessee. His Monster Energy Star Yamaha Racing teammate Shane McElrath got off to a solid start with a pair of fourth-place finishes for fourth overall. Justin Cooper fought back from a tough first moto to end the day eighth overall with a 10-8 tally.

Ferrandis showed speed straight away and was the fastest qualifier. When the gate dropped, it was a wave of blue with all three Monster Energy Star Yamaha Racing teammates up front, but ultimately it was the Frenchman that recorded the holeshot. McElrath passed him for the lead, but he regained it and laid down some fast laps to separate himself from the rest of the field. At the end of the 30-minute-plus-two-lap moto, he had amassed nearly a 20-second gap on the competition.

In the second moto, Ferrandis didn’t get as good of a start in sixth but was right there in the fight. He steadily moved his way forward and made the pass for third on his teammate Cooper just before the start of the fourth lap. A couple of laps later, he battled with his other teammate McElrath, ultimately making the pass stick and chased after the leader. Once again, the Frenchman was able to throw down some fast laps and move into the lead a lap later. He put his head down and went unchallenged to take his second dominant victory of the day to leave the opening round of the championship with a perfect score.

McElrath, who is new to the team for 2020, had a solid start to his 250MX season. In the first moto, he held onto second for another three laps after his teammate passed him and then lost another spot before the halfway mark. The North Carolinian kept knocking down the laps in the challenging conditions to finish fourth. In Moto 2, it was McElrath with the holeshot, but as the laps wore on, he found himself under pressure and was passed for the lead on lap four. He ultimately was shuffled back to fourth, but he never gave up. McElrath made one last run for that final podium spot but came short at the finish line, resulting in a fourth overall finish.

Unfortunately for Cooper, a rough first moto set the tone for the day. The New Yorker got off to a good start qualifying third and was right there up front with his teammates after the gate dropped. He found himself back in fourth and lost another position on the third lap. Just before the halfway point, he had a tip over by the mechanics’ area but was able to rejoin in 14th. He kept pushing and was able to salvage a top-10 finish. Cooper got off to another good start in the second moto in third, but his come-from-behind charge in the first moto had taken up a lot of energy. He started dropping back in the order to eighth and held onto it to end the day eighth overall.

Wil Hahn – Monster Energy Star Yamaha Racing Team Manager
“Today was a great start to the series for us. Dylan rode awesome today, and all of our guys got some great starts. We’re looking forward to building on this momentum.”

Dylan Ferrandis – Monster Energy Star Yamaha Racing
“It’s awesome. It was a perfect day. We got two good starts and were strong in both of the motos. There’s always a little bit of an unknown when you don’t race for a long time, and with the Outdoors, you never know where you are. We have a good setup on the bike, and with the team behind me, I feel like it’s going to be a great year. For sure, I will have to stay healthy, but after today, I feel like we can go for the win every weekend.”

Shane McElrath – Monster Energy Star Yamaha Racing
“I’m happy to get out of this first round with some decent finishes. I got some good starts and led some laps, but we still have a lot of room to grow. I’m excited for next weekend!”

Justin Cooper – Monster Energy Star Yamaha Racing
“The track was really tough today. It was an up and down day for me. I had a bunch of crashes in the first moto that made me use up a lot of energy, and I was pretty fatigued for the second moto. All in all, I’m just happy to be back racing and to leave in one piece. There are only a few days on the bike before we race here again. We will be better for the next one.”