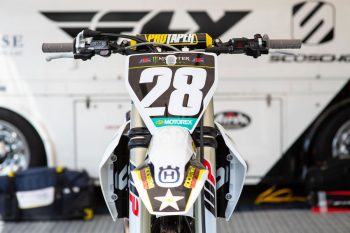 Mosiman is recovering from complications of the incident, however Husqvarna hasn’t specified his injury at this moment.

“It’s unfortunate that Michael has to sit out for at least the first three rounds, as he was riding very well prior to his practice crash,” commented Rockstar Energy Husqvarna’s Stephen Westfall. “We will re-evaluate the situation in a couple weeks.”

Instead, the team has made it official that Stilez Robertson, recently-crowned AMA Nicky Hayden Amateur Horizon Award winner, will make his professional debut in the 250MX class this Saturday at Loretta Lynn’s. Robertson is set to compete in the first three rounds of the series.

“In the meantime, Stilez will get a chance at showcasing his skills against the top 250 riders in the nation,” Westfall added. “We’re really looking forward to having the team back at the races.”