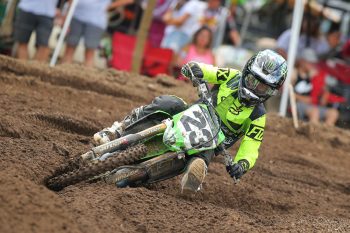 It was a banner week for long-time Team Green athlete Ryder DiFrancesco as he claimed perfect moto scores in both the Supermini 1 (12-15) and Supermini 2 (13-16) classes aboard his KX100 motorcycle. DiFrancesco found himself challenged by the best in the country but none more than with his fellow Team Green teammate Gavin Towers, who also rode impressively all week long.

Chance Hymas and Jett Reynolds led the charge for Monster Energy Team Green big bike riders aboard their KX™250 race bikes as they battled for wins and championships in arguably two of the most exciting classes raced at the ranch this year, the 250 B and Schoolboy 2 (12-17) B/C classes. The final moto of the week in the Schoolboy 2 (12-17) B/C class saw Reynolds get out front and set the early pace.

A small tip over in a corner proved costly for the young teen sensation as he handed the lead to his teammate. Reynolds’ 1-2-5 scores earned him third place overall, but it was consistency that paid off for his teammate Hymas who won a tiebreaker in points, capturing the title in the Schoolboy 2 (12-17) B/C class with his 2-3-1 moto scores.

In the 250 B class, Hymas showed poise and patience with his 2-5-4 moto scores earning him third place overall in the class. While Reynolds showed flashes of untouchable speed and achieved an impressive come from behind ride in Moto 1 to grab a third-place finish, disaster struck in Moto 2. While leading the race, Reynolds made a slight miscalculation in the famous 10-commandments section that would send him to the ground and force him out of the race, and ultimately withdrawal from the class to focus his energy on his other remaining motos in the Schoolboy 2 (12-17) B/C class.

The youngest Team Green member, Ryder Ellis, piloted his KX65 to a second-place overall in the 65cc (7-9) Limited class with his 4-2-1 scores. In the 65cc (7-9) class, Ellis was title contender all week long, but a mishap in the final moto would alter his overall score to a 13th place finish.

In typical fashion, the No. 30 green machine of Jordan Jarvis dominated in the Women’s class with 1-1-1 moto scores. Competing for the SGB Racing/ Maxxis/Babbitt’s Online Kawasaki team, Jarvis also entered in the College (18-24) class where she finished 19th overall in the class.

Donning the No. 1 on his KX450, Nicholas Hayes proudly defended his 2019 Vet (30+) championship with consistent riding throughout the week with his 1-2-1 moto scores and once again captured the title in the Vet (30+) class. Fellow Team Green riders Justin Kelly and Paul Perebijnos were able to join the party on the podium throughout the week and finished third and fourth overall respectively.

In his first trip to Loretta Lynn’s ranch to compete in the AMA Amateur National Championships, Cameron Horner from Bozeman, MT rose to the occasion and piloted his KX™450 to perfect moto scores (1-1-1) to capture his first amateur national championship in the 450 C class.

“Loretta’s this year is one that we will never forget, especially with everything that is going on in the world today,” said Team Green Manager, Ryan Holliday. “We were proud to have had 94 KX™ racers who earned their way to the ranch this year. We enjoy catching up with so many of our Kawasaki racers and families from coast to coast and we strive to give them the best experience and support that our Team Green staff can provide. I am proud of how all of the Kawasaki racers competed this week under the unique circumstances and am already looking forward to returning to the ranch next year.”