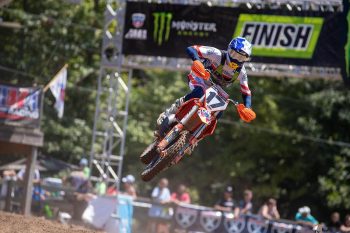 The 2020 Monster Energy AMA Amateur National Motocross Championship came to an exciting conclusion on Saturday, with champions crowned across the remaining 17 categories at Loretta Lynn’s Ranch.

Today was headlined by Open Pro Sport, where Rockstar Energy Husqvarna Factory Racing’s Stilez Robertson had an opportunity to wrap up titles in the two most high profile divisions.

And that’s what Robertson did, passing Gonzales for the lead just past halfway, going on to win the race and championship over Gonzales and Dilan Schwartz (BarX Chaparral Suzuki). He also earned the 2020 Nicky Hayden AMA Motocross Horizon Award – the highest honor in amateur motocross.

On the heels of a three-moto sweep in 125cc B/C, TLD Red Bull KTM’s Max Vohland wrapped up an undefeated week with another victory in Schoolboy 1 B/C. He dominated ahead of Talon Hawkins (Rockstar Energy Husqvarna) and Yamaha/Rock River/bLU cRU Amateur Motocross Team rider Larry Reyes Jr.

Parity defined the first two motos of Schoolboy 2 B/C, as three riders entered Saturday’s final moto with a shot at taking home the title. With 1-2 finishes coming in, Monster Energy Kawasaki Team Green’s Jett Reynolds was in the favorable position alongside Thrasher and Hymas.

It was Hymas who prevailed, however, winning the final moto to take the title after charging through the pack. Second was Thrasher, while fifth in the final outing saw Reynolds have to settle for the final place on the podium.