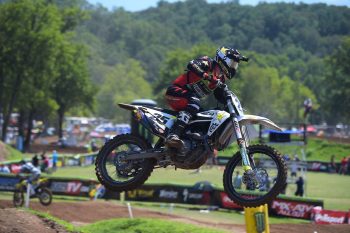 The first group of champions have been crowned at the 2020 Monster Energy AMA Amateur National Motocross Championship.

Undoubtedly one of the hottest riders all week long at Loretta Lynn’s was Haiden Deegan (KTM Orange Brigade). Entering Friday’s final motos for both Mini Sr. 1 and Mini Sr. 2, he had compiled an undefeated record and was set to go a perfect 6-0 en route to a pair of championships.

With his pair of victories, Deegan became the first rider at the 2020 event to bring home multiple AMA national championships. He’s also the first rider to complete the week undefeated across more than one division.

Friday signified a landmark moment in the history of Loretta Lynn’s as the first-ever AMA electric championship was handed out in the Mini-E Jr. category, earned by KTM-equipped Kade Nightingale, but it was Jaydin Smart who raced to the moto victory today.

The final day of the 2020 AMA Amateur National Motocross Championship commences Saturday, 8 August, where champions will be crowned in the final 17 classes. Broadcast coverage of every moto can be seen exclusively on Racer TV.