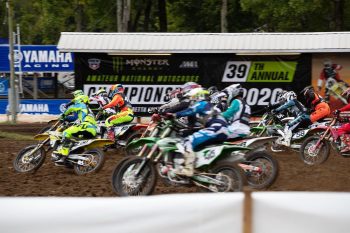 Day three is in the books at the 2020 Monster Energy AMA Amateur National Motocross Championship and, as the motos continue to unfold, the title picture across all 36 classes is beginning to take shape.

As both the heat and humidity at Loretta Lynn’s Ranch continues to climb with each passing day, the challenge of winning will become increasingly difficult.

With two motos down and one remaining, Gonzales and Robertson sit tied atop the overall classification, setting the stage for an epic showdown on Saturday afternoon to see who prevails with the AMA national championship.

Monster Energy Kawasaki Team Green’s Jett Reynolds appeared to be in full control of the moto, but just past the halfway point his race came to an end following a scary incident in the Ten Commandments roller section.

Vohland was even better out the gate to start the second Schoolboy 1 B/C class moto, seizing control of the lead and going on to win over Hawkins and Yamaha Rock River bLU cRU Amateur Motocross Team’s Larry Reyes Jr.

With his decisive wins through his first three motos of the week, KTM Orange Brigade’s Haiden Deegan was one of the hottest riders at Loretta Lynn’s entering the second Mini Sr. 1 moto on Thursday. He again won, over Logan Best (Triangle Cycles bLU cRU Yamaha) and KTM rider Thomas Wood.

Day four of the 2020 AMA Amateur National Motocross Championship continues Friday, 7 August, where the first set of champions will be crowned. Broadcast coverage of every moto can be seen exclusively on Racer TV.