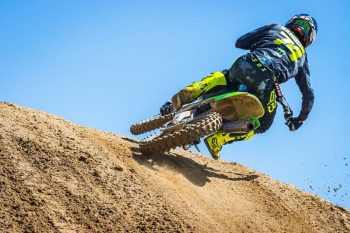 With the recent injuries to Austin Forkner, Jordon Smith, and Garrett Marchbanks during the Monster Energy® Supercross season, the team has added two strong riders to join Cameron McAdoo under the prestigious Monster Energy/Pro Circuit/Kawasaki tent.

“We are in a unique situation with Cameron McAdoo being our only healthy rider at the moment,” said team owner Mitch Payton. “We weren’t exactly sure when racing would resume but we knew whenever that was, we needed to be ready so we had Darian and Mitchell tryout our KX™250 and they both rose to the challenge. We have worked with both of them previously through the Kawasaki Team Green™ program. We’re familiar with who they are and how they ride, and it was an additional bonus that they have both been riding Kawasaki motorcycles for quite some time now. We are ready to get back to the races and to see the team back on the track.”

Both riders will be returning to their roots as they grew up riding for the Kawasaki Team Green racing team throughout their amateur careers. In their professional careers, both Harrison and Sanayei have competed in Europe in the MX2 class for Kawasaki supported race teams with Sanayei on the Dixon Kawasaki MX2 team and Harrison competing for the Bud Racing Kawasaki MX2 team. After reaching the age limit in Europe, Sanayei returned home to the United States to contest in the 2020 Arenacross for the Babbitt’s Online/Monster Energy/Kawasaki team as well as competing in the Monster Energy Supercross 250SX East Region class. Due to the global pandemic, Harrison was forced to close the chapter on racing in Europe for now and looks forward to racing again back in the United States.

“Everybody knows that this is easily the best team in the paddock, just look at the wall of championship plates hanging on the door,” said Sanayei. “This is a huge opportunity for me and I’m really looking forward to making the most of it. I’ve had the chance to ride the bike a couple of times now, and all I can really say is wow. I’ve been on a Kawasaki pretty much my entire pro career and this KX250 really has it all. I am usually a pretty good starter so with the power of this bike and the support of this team, I believe I can put myself in a good position to be battling up front.”

“Man, I cannot tell you how excited I am for this opportunity,” said Harrison. “Right away, I gelled with the bike and felt right at home on the KX250. Up until recently, I have been racing in Europe on a KX250 for Bud Racing for the past year or so and I also grew up racing for the Team Green amateur race team, so I have felt super comfortable from the get-go. This year has been unique for everyone in our sport, especially for myself since I’m from the U.S. but have been racing in Europe and have been dealing with all of the travel restrictions; that’s why it was a no brainer when this opportunity came up. I want to be here racing with the best of the best. I have podiumed at races in the past here and I believe with where I am at this stage in my career and with this bike I can be a threat each weekend.”