Recounting eight standout moments in a two-decade US career.

19 seasons. That’s how long Australian legend Chad Reed has spent racing at the highest level in the United States. Every time he gets behind the gate of a Monster Energy Supercross main, he extends his own record-breaking run that now sits at 265 following Salt Lake City 7 – which could very well be his final appearance after going out on a high with a top 10 result. Following what has been a remarkable full-time racing career, MotoOnline looks back at just some – no, we couldn’t fit them all! – of 38-year-old Reed’s most memorable moments. 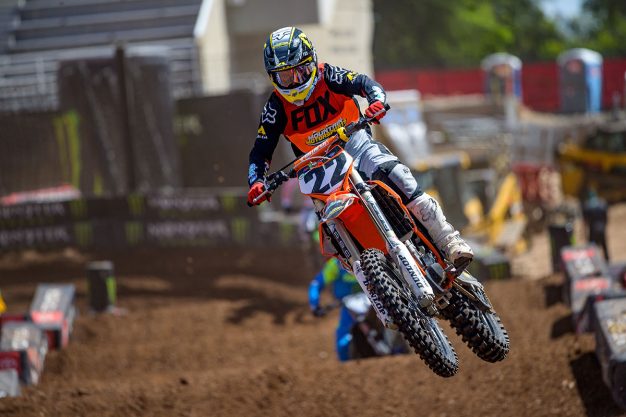 8. On debut at Indy:
Fresh from moving from Europe to the US, then 19-year-old Chad Reed picked up a ride with the Yamaha of Troy team and lined up for the 125cc eastern regional championship in 2002. On his first-ever race aboard a YZ250F four-stroke, Reed got a good start in the main and stalked Mike Brown for most of the race before pulling the trigger on lap 12 and passing the veteran. In hindsight, it was a symbolic changing of the guard, as Reed proceeded to win the next five straight rounds on his way to claiming the title. Reed’s first Supercross win was also momentous, as he became the first-ever Australian – and still the only Australian – to ever win in this series.

7. 2004 Supercross champion:
Two years after his breakthrough performance in the lower tier, Reed fulfilled his ultimate dream with Yamaha’s factory team when he lifted the 2004 250cc AMA Supercross Championship trophy at the Las Vegas finals. It’d been a hard-fought season, but also one of his most successful as he scorched to 10 round wins and a podium at every stop on his way to victory over Kevin Windham, Mike Larocco and David Vuillemin. Australia took notice and the kid from Kurri Kurri suddenly shot to mainstream fame in his home country, putting Supercross on the map and inspiring a whole new generation of racers. The year prior as a premier class winner, he won A1 and went on to stand atop the podium in the final six races of 2003, which was a preview of things to come in 2004.

6. Winning again in 2008:
After three years of coming desperately close to claiming that elusive second championship and some epic battles with long-standing rivals Ricky Carmichael and James Stewart, Reed returned to the championship winner’s circle in 2008. It was arguably Reed’s best season as he won five of the six opening rounds and stormed to nine victories in the championship, eventually beating Windham by 13 points and engaging in some heated battles with a handful of riders along the way.

5. Taking it outdoors:
Although recognised as a Supercross rider at core, Reed was competitive time and time again in Pro Motocross and went on to capture his lone 450 Class crown in 2009. Despite sitting out the 2007 and 2008 seasons, as part of the factory Rockstar Makita Suzuki team Reed managed to win five rounds of the 12 and wrap up the series comfortably ahead of Andrew Short. What’s more, it’s widely understood that he had an insurance policy backing himself that reportedly earned him millions once all was said and done. 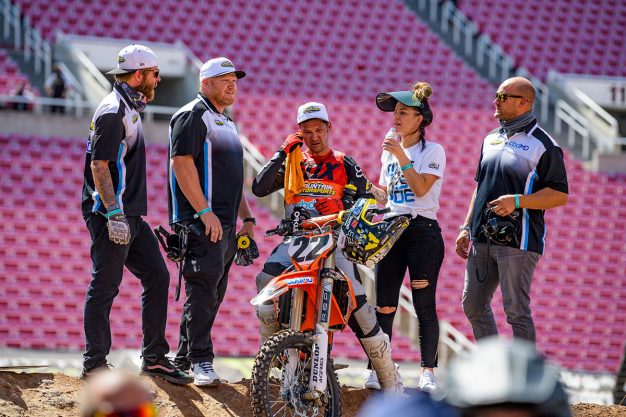 4. ‘The Chadapult’:
We’ve all seen the footage and every year the Lucas Oil Pro Motocross Championship returns to Millville, it’s inevitable there will be replays of Reed’s spectacular crash that will forever be dubbed, ‘The Chadapult’. In 2011, the 450 Class powered out of the gate for the second moto, and after winning the opening outing, Reed was leading the pack. But then things went wrong. His TwoTwo Motorsports Honda CRF450R swapped on an up-ramp, sling-shotting him off the bike and sending him flying through the air. He landed hard, but miraculously was able to get back up and going again and managed to somehow salvage 14th. It proved just how tough and single-focused Reed is as a racer, even if it did ultimately dash his hopes of winning the title after starting so strongly.

3. That 2014 Anaheim 2 victory:
If you ever have the urge to watch an old supercross race, search YouTube for ‘2014 Anaheim 2’ and watch this one. Racing for his own team, TwoTwo Motorsports, Reed surged from sixth on the opening lap to win the main event, straight-up beating some of the biggest names in the sport including Ryan Dungey, Ryan Villopoto, Ken Roczen and James Stewart in the process. Reed’s rampage through the pack had the crowd on their feet, especially when he sailed past long-time rival Stewart with just three laps remaining and they remained standing until well after Reed crossed the finish-line. Aptly, A2 was also his first win in 22 starts at the time.

2. Final victory in Atlanta 2015:
None of the 51,000-strong crowd at the Atlanta round of the 2015 championship knew they were witnessing history when the TwoTwo Motorsports team owner/rider crossed the finish-line for victory. After all, Reed made his final 450SX win at the Georgia Dome look remarkably easy as he led from gate-drop to checkered flag, holding off the always-consistent Ryan Dungey and always-threatening Trey Canard in the process. As it turned out though, that night proved to be the last time we’d see the two-time champion stand on top of the podium and, looking back, it was a truly special occasion.

1. One Last Ride:
2020 was supposed to be Chad Reed’s ‘victory lap’ of sorts in his very own CR22 Racing team, paying homage to the fans who’d screamed and barracked for him for near two decades. After 10 rounds the 2020 Monster Energy Supercross Championship was stopped due to the COVID-19 crisis and the remaining seven rounds were held in an empty Rice Ecceles Stadium at Salt Lake City. It certainly wasn’t the ending that Reed had envisaged, but he still went out with a statement ride at the final round, posting a season-best 10th-place finish. While we still suspect we’ll see Reed return for some select races next year – he has plenty of unfinished business as far as thanking his fans goes – SLC7 was a fitting reminder of just how incredible Reed has been throughout his entire career.