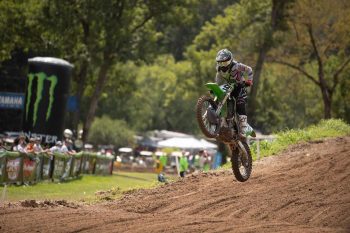 With many of the most prominent classes at Loretta Lynn’s competing on day two, it provided an opportunity for some of amateur motocross’ stars of the future to put their talents on display.

Open Pro made its 2020 Lorettas debut on Wednesday with its first of three motos in a field that includes both 250cc and 450cc motorcycles. Many of the most recognizable names from other divisions converged in the Open class, setting the stage for a hotly contested battle for the title.

Leading the way in the opening moto were the same trio of familiar faces that have set the tone in 250 Pro Sport – Robertson, Gonzales, and Dilan Schwartz (BarX Chaparral Suzuki). Robertson took another win from Gonzales and Schwartz.

When the Schoolboy 2 B/C class rolled onto the line for its first moto it featured many of the same top-tier competitors from 250 B, including Monster Energy Kawasaki Team Green’s Jett Reynolds and Chance Hymas, Monster Energy Star Yamaha Racing’s Nick Romano and KTM Orange Brigade’s Nate Thrasher.

Reynolds took control early and was able to withstand pressure from teammate Hymas to take the victory, while the final spot on the podium went to Thrasher, who overcame a 14th-place start to make a torrid charge through the field and get by Romano in the closing laps.

After starting off his week with a victory in the opening moto of Supermini 2 on Tuesday, Monster Energy Kawasaki Team Green’s Ryder Difrancesco was back in action on Wednesday for the first moto of Supermini 1.

Once again Difrancesco would be forced to contend with fellow Team Green rider Gavin Towers as well as KTM rider Ben Garib. It was again Difrancesco who rode to the win, this time over Towers and Garib as he rounded out the top three.

After a perfect start on Tuesday with a pair of moto wins, KTM Orange Brigade’s Haiden Deegan was again a winner on day two, taking victory in the second moto of Mini Sr. 2 over Monster Energy Kawasaki Team Green’s Krystian Janik and Casey Cochran (Ecstar Factory Suzuki) in third.

Both 65cc (10-11) divisions were in action on Wednesday, with the Limited class contesting its second moto of the week. In each the story was the same as KTM Orange Brigade’s Seth Dennis and Yamaha Rock River bLU cRU Amateur Motocross Team rider Canyon Richards were the class of the field.

History was made on Wednesday at Loretta Lynn’s when the Mini-E class took to the track for the first ever electric bike moto at the AMA Amatuer National Motocross Championship. The class consisted of the youngest competitors at the event and signified a landmark moment for the sport.

When the gate dropped on the final moto of the day it was all Kade Nightingale aboard his KTM, absolutely dominant as he took the checkered flag 21 seconds ahead of second position in a historic result.