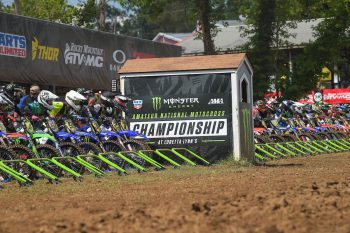 After months of anticipation, motocross finally returned as the 2020 Monster Energy AMA Amateur National Motocross Championship kicked off on Tuesday from the famed Loretta Lynn’s Ranch.

A full slate of action headlined the day, with the first 22 motos of the 2020 event getting underway in this year’s journey to crown 36 champions.

Winning moto one was Schwartz, while Roberston successfully battled from a fifth-place start to earn a runner-up result. Gonzales turned his holeshot into a podium finish in third.

Moto one was won by Leblanc by just over five seconds over Hymas, but drama unfolded on the final lap in the battle for third. Romano, who appeared to have the position in hand, encountered misfortune that also involved Thrasher, handing Reynolds P3.

When racing got underway for the first moto, each of these riders assumed their positions at the head of the pack. In the end, Difrancesco won the opener in front of a hard-charging Ferry, with Towers holding on for third.

As a member of one of the motorsports world’s most successful racing families in recent years, it’s not a surprise to see that Haiden Deegan is ready to leave his mark on amateur motocross. The KTM Orange Brigade rider went on to win moto one in Mini Sr. 1 and Mini Sr. 2.

Deegan led every single lap in each moto en route to a pair of moto wins, both by double-digit margins. Following Deegan across the line in both motos was Triangle Cycles bLU cRU Yamaha’s Logan Best in second and Monster Energy Kawasaki Team Green’s Krystian Janik in third.

The second day of motos for the 2020 AMA Amateur National Motocross Championship continues Wednesday, 5 August. Broadcast coverage of every moto can be seen exclusively on Racer TV.