Revisiting our favorite 450SX and 250SX main events from this season.

Despite the shuddering halt midway through the season, the 2020 Monster Energy Supercross championship was full of incredible racing. Each class was stacked with talent and there was no guarantee who would be leaving each round on the box. MotoOnline thought it’d only be fitting to rewatch them all and highlight our Top 10 favorite main events of the 2020 championship, listed in order of their place on the schedule. 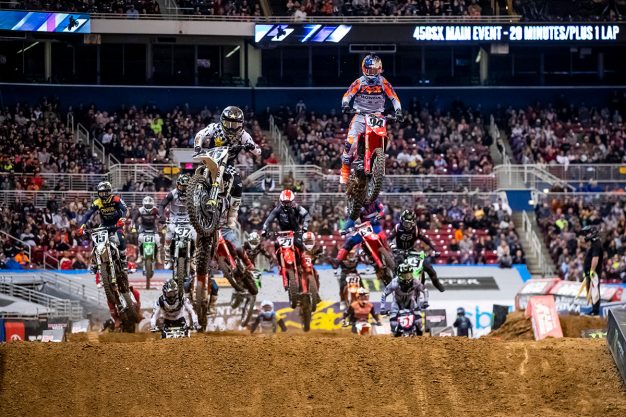 1. Anaheim 1:
A1 always produces wild racing and crazy results as riders jockey for position, try and establish themselves as genuine contenders, and the blowtorch is applied to the title favorites. 2020 was no exception, as Monster Energy Yamaha’s Justin Barcia pulled out the same winning result he did at Anaheim 1 the year before. While he negotiated mud and torrential rain last year, this time around saw him hunt down early leader and 450SX class rookie Adam Cianciarulo, pass and stretch out a five-second lead by the time he crossed the finish line. Meanwhile, defending champ Cooper Webb, who struggled hugely with the flu, finished a gritty third, while Ken Roczen and Eli Tomac claimed sixth and seventh respectively.

2. St. Louis:
Probably the most emotional night of the championship occurred at the second round at St. Louis, when Team Honda HRC rider Roczen broke through for his first Supercross win in three years. After a nightmare few seasons dealing with huge injuries and a debilitating mystery illness, Roczen made his redemption victory look almost too easy. He picked off holeshot winner Osborne on the second lap, then clicked off perfect laps and left the rest of the field in his wake. With the crowd on its feet, Roczen came home with a comfortable four-second lead over Barcia. The German-born Honda rider stood on top of the box another three times over the course of the season, but no victory tasted sweeter than at St. Louis one.

3. Anaheim 2:
Anaheim 2 produced a 250SX main event that’ll be talked about for years. While Geico Honda team-mates Jett Lawrence and Christian Craig set sail out front, defending champ Dylan Ferrandis desperately sliced his way through the pack. The Frenchman clashed with Craig violently halfway through the race, sending the Honda rider flying off his bike and taking them both down. Ferrandis remounted and continued his charge, while behind him, Austin Forkner crashed hard in the whoops. While enjoying an 11-second lead, Lawrence then made a big error and crashed, but even though he still remounted in the lead, Ferrandis had closed the gap. The pair rode the ragged edge and sparred back and forth for half a lap before Lawrence had one of the biggest crashes of the championship. The talented 16-year-old rode rode the front wheel through the whoops before getting slapped into the upramp of the next jump, breaking his collarbone on impact. Ferrandis could cruise the final lap to the victory, but the boos he encountered on the stage afterward left no doubt as to how the crowd felt about his wild pass on Craig earlier in the race.

4. Oakland:
For Roczen, Oakland would’ve brought back haunting memories of Arlington 2019 when he lost the race to Cooper Webb by 0.028s. At Oakland Roczen enjoyed one of his typically strong starts and grabbed the early lead, but Tomac managed to close the gap and get past. After stretching out a handy buffer, Tomac careened over a berm and again surrendered the lead to Roczen. With the clock winding down Tomac went into beast mode and ran Roczen down for the second time to take the W. At the same time, Webb, who at one stage was more than seven seconds behind the leading duo, caught Roczen on the last lap. The pair collided at the bottom of the last 180 turn, popping Roczen out of his line and allowing Webb to scrape past to capture the victory.

5. San Diego:
450SX rookie Cianciarulo and defending champion Webb aren’t strangers, but the race-long battle they put on for the win at San Diego promised that we should see some epic battles in the coming years. Cianciarulo grabbed the holeshot, but Webb made a quick pass for the lead. AC counter-attacked two corners later and took Webb’s line away entering the whoops. The Floridian then led most of the main with Webb always within striking distance, before pulling the trigger late in the race. They elbowed each-other wide on consecutive turns, then raced neck-and-neck for the best part of a lap before Webb set the Kawasaki rider up and got a better drive through a rhythm lane, securing his first win of 2020.

6. Arlington:
While rider opinion is divided on the short, intense nature of the Triple Crown races, there’s no denying the enthralling racing this format throws up. The Arlington round saw five separate winners in six races across the 250SX East Coast and 450SX classes. The 250SX class in particular threw up some big surprises, with RJ Hampshire taking the final one win courtesy of an aggressive move on eventual series champion Chase Sexton. The Geico Honda rider bounced back to win the second, while his arch-rival, Shane McElrath claimed the third. However, Sexton’s consistency proved enough to take the round overall. In the 450s, Roczen started where he left off at the Glendale Triple Crown by winning the first race, before Tomac shut down the rest of the competition by taking the checkers in the next two mains. Arlington also saw Webb experience a huge crash on the dragon’s back that catapulted him onto the concrete, injuring his tailbone.

7: Daytona:
Traditionally speaking, whoever leaves Daytona as the championship points-leader usually has a strong chance of winning the title. That mantra rung true again this year as Tomac hunted down and passed Roczen for a win at Daytona, that, in hindsight, marked the beginning of the end for Roczen’s campaign. The pair entered Daytona tied on points and sharing the red plate, but when Tomac found himself buried off the start and Roczen tearing away out front, it looked as though Roczen would gain the championship upper-hand. Tomac dug deep and, on a typically rough, heavily rutted track, he reeled in and tore past his rival when Roczen bobbled and lost his drive out of a corner. Tomac never looked back and scored a vital upper hand, especially as the series was then paused for 11 weeks due to the COVID-19 pandemic.

8. Salt Lake City 3:
Of the final seven rapid-fire rounds at Salt Lake City, the most memorable was SLC3 after rain turned the track into a treacherous rut-fest. Despite the best efforts of the track crew, the track continued to deteriorate as the day wore on. While the vast majority of the 450SX field struggled to put down consistent, clean laps, Tomac and Webb soared to a whole new level of superhuman-ness. The pair chased each other for the entire race and lapped all the way up to fourth place during the 20-minute main event. Their race pace in the conditions was so otherworldly, they lapped Roczen (who struggled to 10th with health issues) twice, blowing the fight for the championship runner-up spot wide open.

9. Salt Lake City 7 (250SX Showdown):
All season long fans, commentators, industry and media talked up how strong the 250SX West field was compared to 250SX East in terms of depth. While the points about the talent depth in the field might be valid, Chase Sexton and Shane McElrath proved in the 250SX Showdown that they were more than up to the task of showing which coast was quickest. The pair finished first and second in the winner-takes-all race, leaving no less than seven western region racers fighting for the minor placings inside the top 10. If nothing else, Sexton and McElrath would’ve felt a smug satisfaction knowing that even though the eastern championship effectively came down to a two-rider race, their pace was arguably better than their west coast counterparts when they went head-to-head for the lone time this year.

10. Salt Lake City 7:
Since jumping up to the premier class, Rockstar Energy Husqvarna’s Zach Osborne has shown plenty of promise, but clinching his first race win has proved to be an elusive task in such a quality-stacked field. However, it was a different Osborne that emerged from injury for the final seven Salt Lake City rounds. The former 250SX East Coast champion never finished outside the top five in SLC and finished the season off with a bang as he won the final round of the championship. To make the victory even sweeter, Osborne was flanked by his team-mates Jason Anderson and Dean Wilson as the factory Husqvarna team dominated the podium. Meanwhile, Tomac cruised to fifth on his way to clinching his first 450SX championship and to cap-off his ‘One Last Ride’ tour, retiring icon of the sport Chad Reed rode to a special 10th-place result to round out his spectacular career.