MXGP season to instead include Mantova on revised 2020 schedule. 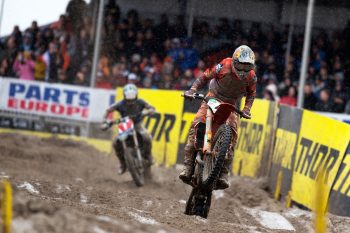 This year’s Monster Energy Motocross of Nations (MXoN) has now been cancelled altogether by Infront Moto Racing and the FIM after plans to host a hybrid event within an MXGP weekend didn’t eventuate.

Initially scheduled for France and then more recently moved to Great Britain as part of an MXGP round, the historic event won’t go ahead at all in 2020.

“Infront Moto Racing and the FIM regret to inform that the 2020 Monster Energy FIM Motocross of Nations scheduled to take place on 25-27 September in Matterley Basin, Great Britain, has been cancelled,” a statement confirmed.

“Despite all the efforts by the local organiser [Steve Dixon] and Infront Moto Racing, there is no other viable option but to cancel the 2020 edition of MXoN due to the coronavirus disease (COVID-19) pandemic.

“Additionally, information from nearly all of the non-European teams who normally attend this event is that due to COVID-19, travel restrictions and quarantine protocols, they will not be able to take part in this year’s event.

“Taking all these factors into consideration and given the prestigious profile of the event, Infront Moto Racing and the FIM have decided to cancel the event and look forward to an exceptional Monster Energy FIM MXoN in 2021!

“Consequently, the MXGP of Winchester in Matterley Basin (Great Britain) to be held on the same weekend has also been cancelled. This event will now be replaced by the Grand Prix of the Citta di Mantova in Mantova to be held on 30 September.

“Infront Moto Racing and the FIM would like to thank the National Federations, organisers, the manufacturers, partners, riders, teams and fans for their cooperation, patience, understanding and support.”

Currently two rounds into the 2020 season prior to the pause, the new-look MXGP World Championship calendar will resume with three-straight rounds at Kegums in Latvia, beginning on 9 August.