Honda has taken the wraps off its 2021 CRF450R, beginning a new chapter of premier class motocross models that has been inspired by a ‘razor sharp cornering’ development theme.

The all-new CRF450R is guided by three main goals for 2021, being improved power, improved handling and improved consistency over the course of a moto.

That first point was addressed by making changes intended to increase the engine’s horsepower and torque, particularly in the bottom-end of the range. The second objective was addressed by optimizing chassis rigidity, altering geometry and reducing weight. The final target was pursued via updates to the clutch, as well as the ergonomics for improved rider movement.

As is often the case, benefits overlapped, with improvements in one area leading to benefits in other areas. For example, the power and torque increase result in changes to power delivery that make the machine more manageable in corners. Similarly, the reduced weight not only aids cornering, but promotes a more consistent performance by the rider over the course of a race.

Speaking of weight savings, the reduction here is an example of something that was only achievable during an overall redesign and only by accumulating small benefits in myriad areas. It boasts a three-pound weight reduction overall.

The CRF450R engine has undergone a number of significant updates aimed at improving bottom-end and midrange power, making for a linear delivery that is strong but manageable, even as the rider tires. In addition, peak power is up 0.8 horsepower above 5000rpm.

The design of the Unicam cylinder-head has been updated, with the decompressor system’s counterweight relocated from the right end of the camshaft to the left. This improves combustion stability in the extremely low rpm range and contributes to a strong, but manageable, power delivery in corner exits, for example, as well as resistance to stalling. The magnesium cylinder-head cover has also been designed with a thinner material, for weight savings.

The engine’s exhaust port has been centralized, ovalized and straightened, achieving improved exhaust efficiency and revised torque characteristics, for a linear delivery that continues into the high rpm range. As before, a five-hole piston oil jet and dual 12mm drum scavenge pump manage lubrication.

The CRF450R features a downdraft intake design that delivers strong, efficient power, but the air boot has been drastically enlarged (from 1.8 liters on the clean side of the air filter to 4.1 liters), resulting in better torque at low rpm. In addition, the rubber ring has been eliminated to simplify filter cleaning, with an external frame added to ensure a good seal is maintained. The air box is now accessed with the removal of a single side-panel bolt.

The angle of the fuel injector has been increased from 30 degrees to 60 degrees, enabling the spray to reach all the way to the back of the butterfly, thus cooling the upstream side of the intake path, improving intake efficiency and torque feel. In addition, the fuel pump is now smaller and 120 grams lighter. It’s affixed via a simplified mounting system using only four fasteners instead of six. Fuel pressure and filter life are both unaffected.

For 2021, the CRF450R makes the switch from two mufflers to one, reducing weight and improving bottom-end torque delivery. The entire exhaust system now weighs 8.5 pounds, a reduction of 2.7 pounds from the previous model. 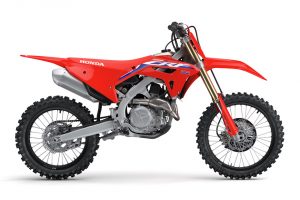 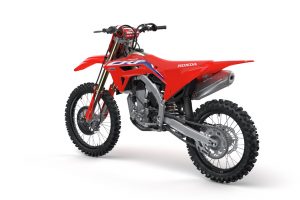 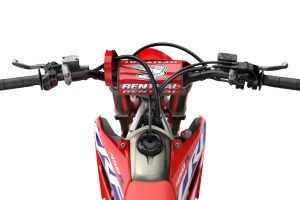 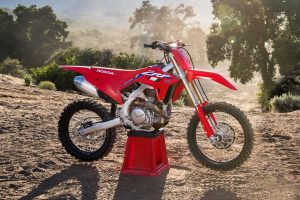 With the engine’s new centralized exhaust-port location, the exhaust header is now routed 74mm closer to the engine on the right side, while the single, right-side muffler has been reshaped to move its outer surface 13mm inboard. The combined result is a slimmer body (including external parts), contributing to freedom of movement for the rider. Two resonators (one after the front U-bend and another at the upstream end of the muffler) boost power and reduce noise, while the heat shield has been eliminated to reduce weight.

With an eye toward increasing clutch durability, engineers increased clutch volume by 27 percent while also adding an eighth clutch plate and using stiffer springs. In addition, a friction spring was added to suppress resonance and greatly improve power delivery. These changes reduce clutch slip by 85 percent at peak power, as measured by a chassis dynamometer.

To facilitate clutch actuation and encourage consistent performance, a hydraulic clutch is now utilized as on the HRC factory machines. As a result, the force needed to pull the handlebar lever is reduced. Depending on where in the lever stroke the measurement is taken, the reduction can be as much as 10 percent compared to the previous model, even with the stiffer springs.

A gear-position sensor allows the use of three specific ignition maps for first and second, third and fourth, and fifth gears. There are options for Standard, Smooth and Aggressive ignition maps, selectable via an all-new handlebar-mounted switch, enabling simple tuning depending on rider preference or course conditions.

A number of significant chassis revisions were incorporated in order to improve cornering. With these changes, geometry is now different as the wheelbase is now 1mm shorter (at 58.3 inches), rake is relaxed 0.5 degrees (at 27.7 degrees), trail is reduced by 2mm (now 114mm), the swingarm angle is 0.9 degrees steeper (at 14.5 degrees), the seat height is 5mm taller (at 38 inches), ground clearance is increased by 8mm (now 13.2 inches) and the distance from the front axle to the swingarm pivot is 1.8mm longer (at 36 inches).

As before, heavier components are positioned centrally and as low as possible. The result is improved cornering without sacrificing high-speed tracking, in addition to reduced squat under acceleration and less pitching during hard braking.

An all-new frame uses narrower main spars, a redesigned downtube and features rearranged reinforcement ribbing on the backside of the pivot plate, changes that contribute to an overall weight reduction of 1.54 pounds, with the new frame weighing just 18.5 pounds. Lateral rigidity is reduced by 20 percent, resulting in supple feel that improves cornering—while vertical rigidity is maintained.

The subframe features a simplified design that enabled the elimination of a separate seat support, achieving an overall weight of just 2.0 pounds, which is over 0.7 pounds down from before. In addition, the swingarm is now narrower, providing increased clearance in ruts, with rebalanced rigidity tuned to match the frame and improve rear traction and cornering.

Front suspension comprises a 49mm inverted Showa coil-spring fork that follows the basic structure of that on the 2020 CRF450R and a gas-liquid separation structure, but suspension stroke has been increased by 5mm to better absorb rough terrain while also reducing pitching. In addition, the axle holders have an updated design for increased rigidity. 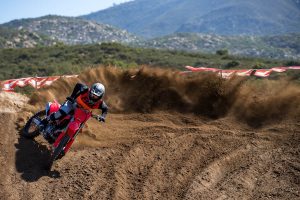 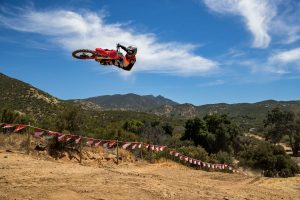 The upper and lower triple clamps have both been redesigned as well, with rigidity rebalanced via updated reinforcement ribs, delivering increased flex characteristics for improved handling and feel through a corner.

The Pro-Link rear-suspension system uses a Showa shock absorber whose shape has been adapted to work with the new frame, with adjusters moved from the left side to the right. Weight was cut here as well, by switching to an ultra-light steel shock spring. The link ratio and rear travel has also been changed so that acceleration-triggered rear-end squat is reduced.

The technical changes to the CRF450R enabled the adaptation of slimmer bodywork, which facilitates rider movement. For example, the lack of a left-side muffler made possible a side panel that is 50mm more inboard and even the right side panel is moved 20mm inboard thanks to the new muffler shape. Together, the changes result in a 70mm reduction in width at the rear of the bike, substantially benefitting rider movement and, consequentially, cornering. The junction of the radiator shroud and the side panel is smoother as well.

The radiator shrouds are new as well and each is now produced in a single piece instead of two separate parts. Computational Fluid Dynamics (CFD) were used to design new air-outlet vents in the shrouds. The radiator grills have also been revised to optimize the number of fins and their angle, resulting in a five percent improvement in cooling performance, without changing vehicle width at the shrouds.

Whereas the seat was previously installed by sliding it forward onto the subframe and then securing it at the rear, the new seat base has rearward-facing tongues and front-located mounting tabs. This eases installation, and acceleration forces keep the seat securely in place. The 1.7 gallon fuel tank is once again made of lightweight titanium but has a new design, and the plastic tank cover has been eliminated.

During the model’s redesign, engineers looked for and capitalized upon every opportunity to cut weight for improved handling. For example, only eight fasteners are used to secure all of the main bodywork components including both radiator shrouds, both side panels and the seat, instead of 12 previously. In addition, all of the bolts for the main bodywork parts now have 8mm heads, simplifying maintenance.

A further 98 grams were cut by combining what used to be two left-side handlebar switch assemblies into a single cluster that addresses several functions – engine stop, ride modes and Honda Selectable Torque Control (HSTC). The starter and HRC launch control are on the right side of the Renthal Fatbar handlebar.

As before, there are two locations for the handlebar clamp and the clamp can be turned 180 degrees. As a result, four different mounting positions are possible, through a range of 26mm. Routing the throttle and clutch control cables behind the handlebar instead of in front allowed for a weight reduction of 100 grams high on the bike.

Set to arrive in dealerships this September at the price of $9599, the 2021 will be in addition to the current model, which will remain available at a permanent price reduction and made possible through an additional production run, the model is a standout option for customers seeking high performance and a good value. 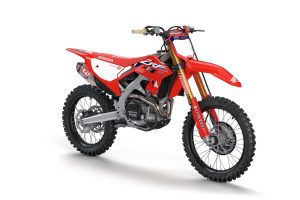 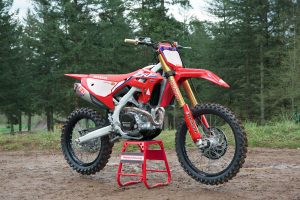 Each of the CRF450R’s updates is transferred to the high-spec CRF450RWE (Works Edition) motocross machine, which in addition to its already illustrious list of trick parts, features a Twin Air air filter plus Hinson clutch basket and cover for 2021.

Additional updates include a lightweight full titanium Yoshimura exhaust system (header and muffler), and like the CRF450R, the system has switched from two mufflers to one, reducing weight and improving bottom-end torque delivery.

Compared to the CRF450R, the CRF450RWE’s lower fork legs are coated in titanium nitride to minimize stiction and promote smooth action. The CRF450RWE has special D.I.D DirtStar LT-X rims that are even stouter than the standard D.I.D rims of the CRF450R. A special gold RK chain delivers power to the rear wheel.

Rounding out the package are Throttle Jockey graphics, straight off the Team Honda HRC factory machines of Ken Roczen and Chase Sexton. It will be available in dealerships from this November at the price of $12,380. Visit powersports.honda.com for further information.