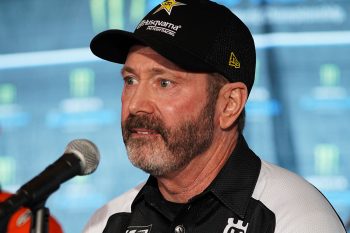 Hewitt had been operating the Rockstar Energy Racing team with Suzuki and KTM machinery prior to becoming Husqvarna’s factory team in 2015 and transitioning into the management role.

Initially reported by PulpMX, widespread rumours through the latter stages of the 2020 season had suggested Hewitt and Husqvarna had split, however, confirmation has only been made this week as we await the commencement of Lucas Oil Pro Motocross.

“After more than five years of working together, it was announced today that Husqvarna Motorsports, Inc. and HRH Racing, Inc. have mutually agreed to conclude their business relationship for the remainder of the 2020 race season and beyond,” a short statement confirmed.

“As a result of this new agreement, HRH Racing, Inc. owner, Bobby Hewitt, will no longer serve as team manager of the Rockstar Energy Husqvarna Factory Racing Team. Husqvarna Motorsports, Inc. would like to thank Bobby Hewitt for his commitment to the race team over the past five years and wish him the best in his future endeavors.”

The success of Hewitt at the helm of Husqvarna’s official team has been immense, capturing the 2018 450SX crown with Jason Anderson – who ride with Rockstar Energy Racing previous to the Husqvarna partnership – as well as winning two 250SX East championships in 2017/2018 and the 250 Class outdoor title in 2017 with Zach Osborne.