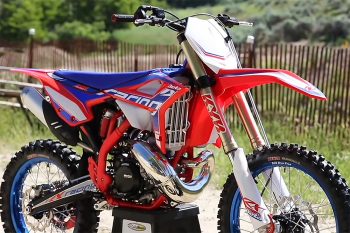 Renowned Italian off-road brand Beta has made an unexpected move into motocross with the introduction of its 2021 model Beta 300 RX in the United States.

Specifically powered by a 293.1cc two-stroke engine, the new Beta 300 RX has been tuned for motocross, featuring electric start, a six-speed transmission and an adjustable power-valve.

The chassis includes a frame purpose-built for the RX model, as well as a KYB closed cartridge front fork and Sachs rear shock, which have internal settings that were developed by Beta USA’s in-house suspension department.

“We wanted to build an MX bike that utilised many of the characteristics that our off-road race bikes have, but with more power and stiffer suspension,” Beta USA president Tim Pilg commented. “The RX model shows how much fun a two-stroke can be. The sound and feeling of the bike is unmatched and I hope our future owners of the model will appreciate the effort put into the bike – it is truly special.”

Beta has emerged as the dominant force in the Enduro World Championship during recent seasons, capturing the EnduroGP and Enduro 1 titles with Brad Freeman, while Steve Holcombe rode to the Enduro 3 crown in a convincing display from the Italian manufacturer.