Season 2020 to restart with three-straight rounds at Kegums next month. 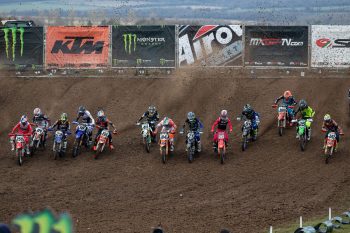 A heavily-revised 2020 MXGP World Championship calendar has been unveiled, which could now include a point-scoring round at the Motocross of Nations (MXoN) in Great Britain.

The new-look schedule could feature up to 18 rounds – two already held and a further two to be confirmed – when it resumes at Kegums on 9 August.

There will be three-straight rounds in Latvia to reopen the season, while Faenza in Italy and Lommel, Belgium, will also play host to multiple events later in the year.

Both the MXGP of Russia and the MXGP of Portugal remain part of the 2020 world championship calendar as TBC, depending on the ongoing national conditions.

In order to provide the riders with a longer recovery period, the MXGP and MX2 race action will be concentrated on one day, with free/timed practice taking place in the morning and the races starting from midday into the afternoon.

Infront Moto Racing and the FIM have confirmed that Ernee, France, will no longer host MXoN this year, instead delayed until 2023 due to severe restrictions in relation to COVID-19.

Instead, Matterley Basin in the UK will likely be the location of MXoN on 26-27 September, coinciding with round nine of the season. The format of that combined event remain a work in progress, according to organizers.