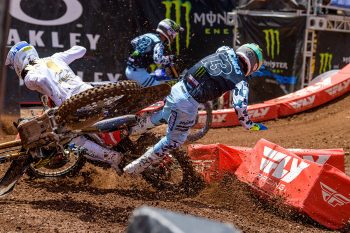 The Monster Energy Star Racing Yamaha rider underwent surgery on Friday in order to repair the damage in his right hand, now on the road to recovery in a bit to be fit for the outdoors.

“I’m very disappointed, to say the least,” said Nichols. “I was really enjoying being back to racing in Salt Lake City and I was happy with the way I was riding. It was good to get back on the podium and run up front, and I was looking forward to carrying that momentum into the MX nationals.

“I knew that something was broken at the track, but I waited to get back to SoCal with my regular physician to learn the extent of the injury. I broke the third metacarpal bone in my hand – not a horrible injury – but it required a small plate and a few screws to expedite the healing.

“I originally wanted to try and make it to the first national, but doctors say it needs four-to-six weeks to heal. We’ll play it by ear.”

Nichols said that he misjudged where Sexton was when he chose to go to the inside as the Geico Honda rider was already committed to tripling into the turn. He was able to cross the finish and qualify, but couldn’t make the start for the final.

“Initially I was thinking ‘how did that just happen?’, but after reviewing the footage of the crash, I realize that I misjudged how close he was to me when I went double-single and cut to the inside,” he explained. “I did look over my shoulder, but I simply didn’t see him – it was a racing incident.”