Italian legend to race-on for another year in the world championship. 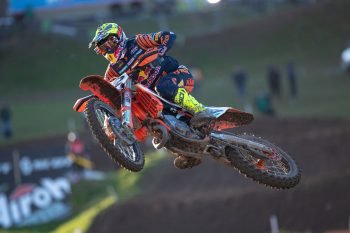 The 34-year-old will contest his 18th year in grands prix and aim for a first crown since he won the 2017 championship with KTM, which he first joined for the 2010 season.

“I’m really motivated for another good season next year, so I’m really happy with the renewal of my riding contract,” Cairoli said. “We’ll see what 2020 has in store, but my goal is to aim for the championship and again in 2021. I’m very proud to have been so long with this factory team and I still want to write some pages in the history of KTM motocross.”

Pit Beirer, KTM Motorsports director, commented: “It says a lot for Tony as a rider and a person and an athlete that he is still so competitive when MXGP is at a top level. He could have walked into other teams when it was clear he wanted to continue in 2021, but it was important for us to extend his story with KTM and that couldn’t make us any happier.

“We have no doubt that he has the desire to go for a 10th title either in the season we will eventually have in 2020 or in 2021. It makes us all very proud to have a team with the caliber of Tony, Jeffrey [Herlings] and Jorge [Prado].”

Cairoli, who has delivered six titles with KTM in the past decade, will once again be partnered with Herlings and Prado in the premier class for the new season next year. Combined, the trio boast a total of 15 world championships.