Breaking down the final stretch of season 2020 in Salt Lake City.

After a rapid-fire conclusion, the 2020 Monster Energy Supercross champions have been crowned. For a range of reasons, this year’s championship will go down in history as one of the most fascinating series on record. In this installment of Q&A, take a deep dive into how the titles were won as we answer some of the burning questions now that the Salt Lake City stretch is over. 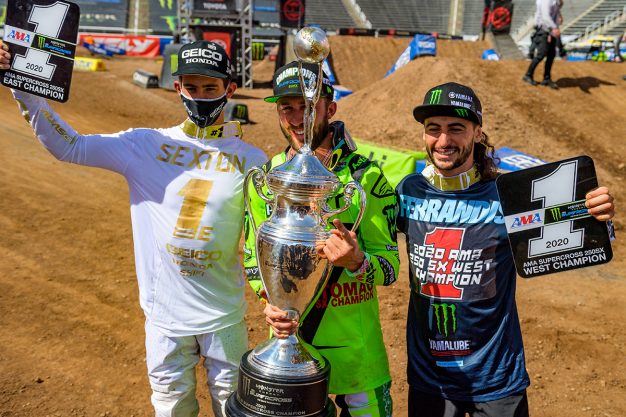 Was it the right decision to slot the final seven rounds into three weeks in Utah?

100 percent. When you think back to March when Indianapolis was cancelled and then the series was postponed altogether soon afterwards, most in the industry weren’t even certain that Supercross would make it beyond Daytona’s 10th round. It was then expected that the championship could potentially resume in the fall following Lucas Oil Pro Motocross, however, it became apparent that there could be a window where all seven of the remaining events could be staged behind closed doors under strict COVID-19 protocols. Finally, two months later and despite widespread speculation that the series remainder would be taking place in Arizona, it was instead announced that Rice-Eccles Stadium would be the home of rounds 11 through 17. And it worked. Championships were ultimately won, the racing was spectacular and Utah has since become a favourite for the sport of Supercross. Well done to everybody involved, especially Feld Entertainment, which displayed incredibly impressive leadership throughout the process.

How easily did Eli Tomac win the title?

Coming into the final seven rounds, just three points separated Monster Energy Kawasaki’s Eli Tomac and Team Honda HRC’s Ken Roczen. Everyone expected a few scenarios to unfold – that battle intensity would only escalate, that Tomac would melt down for at least one race, or that Roczen would push for Honda’s first 450cc title since the days of Ricky Carmichael. But none of that really eventuated. If anything, Red Bull KTM’s Cooper Webb was the most dominant figure to emerge from SLC, with three wins and three second places in seven races. With Webb only having an outside chance at defending his title, Tomac – who’s used to pushing himself at altitude – was able to manage the championship and keep both rivals at arm’s length. He threatened to wrap up the title with one round to spare and ultimately only needed to coast to a finish in the final main event to finally take home the silverware that’s eluded him so many times before.

Does anybody actually know what’s up with Ken Roczen?

You can’t help but feel for Kenny. After a strong start to the Utah rounds, Roczen’s mysterious health condition that hampered his 2019 campaign seemed to come back and haunt him after all. Come the eight to 10-minute mark in the mains and after his signature strong starts, he’d throw out an anchor and get swallowed up by the field. On top of that, he revealed he was also battling shingles, but didn’t let the excuses get in the way. He proved he’s one of the gutsiest riders in the field by somehow winning round 15, but his battle for the championship turned into a fight for second as Webb surged back into contention.

Were Chase Sexton and Shane McElrath that much better than the rest in 250SX East?

Yes. It became evident quite early on that the 250SX East championship was going to largely be a two-rider race between the defending champion Chase Sexton (Geico Honda) and Shane McElrath (Monster Energy Star Yamaha), with some guest starring roles from RJ Hampshire (Rockstar Energy Husqvarna), McElrath’s teammate Colt Nichols and Daytona winner Garrett Marchbanks (Monster Energy Pro Circuit Kawasaki). Unlike western region, which was stacked with talent right through the top 10, the east’s talent pool was surprisingly shallow this year, especially after Hampshire had to sit out the remainder of the championship after Daytona when he underwent a knee reconstruction. And once the Showdown arrived, Sexton and McElrath displayed their strengths by going 1-2 in the main event! Top-finishing 250SX West rider was Michael Mosiman (Rockstar Energy Husqvarna) as he filled the podium. How did Dylan Ferrandis finish with a 20-point championship buffer when just seven separated him and Austin Forkner going into the final round?

Monster Energy Star Yamaha Racing’s defending 250SX West champion Dylan Ferrandis and Monster Energy Pro Circuit Kawasaki’s Austin Forkner had a heck of a scrap for this year’s championship. Only seven points separated them heading into the Showdown, but Ferrandis had a disastrous start to the day when he found himself at the bottom of a second-turn pile-up in his heat and had to qualify for the main via the LCQ for the first time in his career. The drama elevated in the main event when Forkner had a huge crash off the dragon’s back just a couple of laps in, causing the race to be red-flagged. Forkner was unable to get back behind the gate and suddenly the pressure was off Ferrandis, who cruised around the restarted main to fourth place, winning the west coast championship by 20 points over his teammate Justin Cooper. Forkner slipped to third in the standings, a further four points in arrears and the PC trophy cabinet remains bare following SX for another year.

Is that it for Chad Reed? Is he really done?

As far as racing professionally week in, week out goes, yes, the Australian legend has stated that the 2020 Supercross championship would be his last. He did it in his typical gritty style too, with an impressive 10th place in the final main event. Going into that final round he’d hinted that he could line up at selected races next year to visit stadiums and farewell his legions of fans that he didn’t end up seeing. However, after taking that momentous top 10 result on Sunday, Reed stated, “I don’t know if I’ll be back or not, but this is a good one to end it if this is it”. Reading between the lines, he might be content to finish on such a positive note, but you never know what could happen next year if he starts feeling the urge to return for select races.

Rockstar Energy Husqvarna swept the podium at the final round. When was the last time a manufacturer did that in the 450SX class?

It’s a remarkable feat and proves just how far the Rockstar Husky team has come since the beginning of the year with first-time 450SX winner Zach Osborne winning ahead of Jason Anderson and Dean Wilson, but it actually wasn’t that long ago that we saw a manufacturer complete the podium sweep in Supercross. At Indianapolis last year KTM swept the podium in a sea of orange, when Marvin Musquin (Red Bull KTM) won, followed by Blake Baggett (Rocky Mountain KTM WPS) and eventual champion Webb (Red Bull KTM).