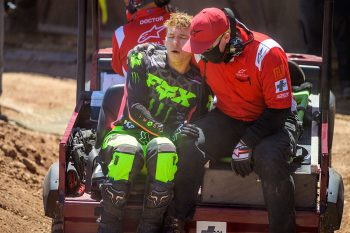 An update provided by Kawasaki on Austin Forkner has confirmed that he sustained multiple abdominal injuries in the crash that ended his 250SX West title challenge in Monster Energy Supercross.

Forkner was in a strong position during the 250SX Showdown at Salt Lake City 7 when he fell, causing a red flag and enabling defending champion Dylan Ferrandis to effectively ease to back-to-back titles.

“During the incident at the final round of Supercross, Monster Energy Pro Circuit Kawasaki’s Austin Forkner suffered multiple abdominal injuries that will sideline him for the next 6-8 weeks,” the injury update stated.

With Forkner now set to miss the beginning of Lucas Oil Pro Motocross in addition to injuries already sidelining Garrett Marchbanks and Jordon Smith, Cameron McAdoo is the sole current Pro Circuit team rider who will be fit for the Ironman Raceway opener on 18 July.