Battles back through the pack to finish eighth after first turn fall. 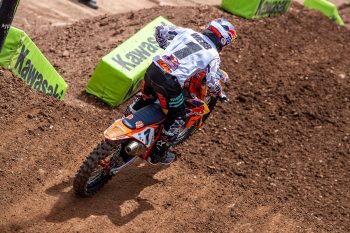 The Red Bull KTM’s hopes were ended in the opening corner, however, being caught up in a multi-rider incident and witnessing his chances fade as the field accelerated away. Webb recovered for P8 in the main event, which was enough to edge Ken Roczen (Team Honda HRC) for second in points.

“It was a rough main event,” Webb admitted. “I kind of struggled with the track a little bit and I didn’t ride my best race, but I came back to eighth, so I was able to secure second in points. I obviously wanted to keep the podium streak going, but it is what it is. Overall, it was a great season and we’ll get ready for outdoors.”

The final round rounds in Utah were remarkable for Webb as he pressed to challenge Tomac and Roczen for the number one plate, scoring three victories and three second-place results over the course of three weeks.