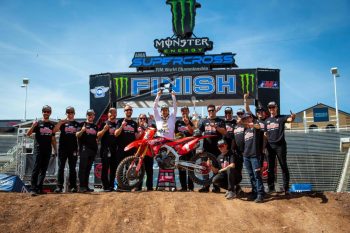 Another statement ride in a season filled with them defined the day for GEICO Honda’s Chase Sexton, who claimed the prestigious AMA Supercross 250 East/West Showdown victory Sunday at Rice-Eccles Stadium. The race win put a stamp on Sexton’s second-straight championship season in the 250SX Eastern Region, which included five race wins and podium finishes in seven out of eight rounds.

Last year, Sexton won just one race en route to the championship. His improvements for 2020 pave the way to a full-factory ride in the 450 division with the Honda HRC team. At the Salt Lake City finale, the only race of the 2020 supercross season where the best of the East and West raced together, Sexton had to outduel his primary title rival, Shane McElrath, to get the race victory. While Sexton didn’t need to win the race to claim the championship, he was happy to end his 250 career on top.

“Yeah, I’m satisfied,” said Sexton. “Everyone said I got lucky last year and that really fired me up for this season. Man, this feels good. I won five main events. I’m just a kid from Illinois, from a town of 800 people. It feels so good. This is my last 250 race, now I’m moving to the 450 with HRC Honda, and man I cannot be more excited. I won the race. Shane [McElrath] was trying to play some games there, but it’s whatever. I pulled away and made it happen. I can’t thank my team enough. They’ve been behind me since I turned pro, and this just feels so good. I’m so happy, I can’t even explain where I’m at right now!”

Sexton will move to the Honda HRC CRF450R for the upcoming AMA Pro Motocross Championship.

GEICO Honda riders were up front throughout the Showdown, with Jett Lawrence bumping and banging his way to a fifth-place finish.

“Was a big learning day for me,” said Lawrence. “I have the speed and I still have a lot to learn in race conditions. I’m disappointed not to finish on the box but overall happy with the progression I have made in my rookie year. Looking to shake things up in a month when we go outdoors.”

Jo Shimoda wrapped up top rookie honors in the 250SX East division, logging a strong third in the final standings thanks to consistent riding. He was eighth in the loaded field of East and West talent on Sunday.

“Yeah felt good in timed qualifying, just had one jump that I had to try before the heat race, I qualified fourth,” said Shimoda. “Heat race I got not too bad of a start, I was hitting the whoops good and made passes to get to third. For the main event I started 11th and again passed guys on the whoops to get eighth for the day. Really happy with my first supercross season, third in points and top rookie, and I feel like I learned a lot with my riding.”

Christian Craig was up front early in the race, but then the action was red-flagged and re-started due to a downed rider. An injury flared up for Craig after the restart, and he ended up 12th.

“The day yesterday started pretty bad for me,” said Craig. “I didn’t feel comfortable all day and dragged my leg in a rut so bad in practice that my hip partially came out. I had Dr. G put it all back into place before the heat and it felt way better. I was able to fight my way to second in the west heat which I was happy with. In the main event, was running second until it got red flagged. For the restart, I was mid pack but after a couple laps, my hip came out of place again, and I couldn’t put my foot out. I should have had Dr. G make sure it was all good after the heat but you live and learn. Thankful to end this season healthy- now it’s time to get ready for outdoors!”

Hunter Lawrence suffered a big crash in his heat race. He raced the Last Chance Qualifier but was extremely sore and he struggled, failing to qualify for the main event.