Assorted racer comments following the 17th round of the season.

In Quotebook, a selection of riders detail round 17 of the 2020 Monster Energy Supercross, an FIM World Championship, at Salt Lake City. 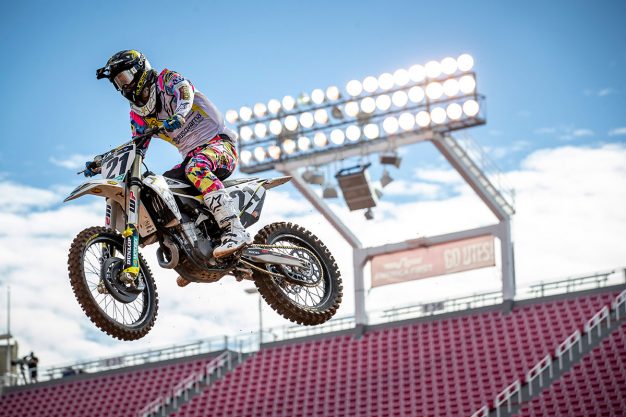 Cooper Webb (Red Bull KTM Factory Racing) – Eighth:
It was a rough main event. I kind of struggled with the track a little bit and I didn’t ride my best race, but I came back to eighth, so I was able to secure second in points. I obviously wanted to keep the podium streak going, but it is what it is. Overall, it was a great season and we’ll get ready for outdoors.

Jason Anderson (Rockstar Energy Husqvarna Factory Racing) – Second:
All in all, it was a good trip in Utah and ending it on a high note with all three of us on the podium was good. I enjoyed Salt Lake City, so let’s do this again and get ready to go for outdoors.

Zach Osborne (Rockstar Energy Husqvarna Factory Racing) – First:
That was a great race for all three of us. It feels amazing to get some results here at the end of the season for my team. It was an incredible day and I’m just really proud for the whole team to be on the podium. It’s been an amazing trip in Salt Lake City.

Dean Wilson (Rockstar Energy Husqvarna Factory Racing) – Third:
I was a bit tight running up front but I just tried to play it cool and smart. My goal was to get on the box and that’s what I did. I’m stoked to get a third place, lead some laps and end this SX season the way I wanted to. I would have liked to have more podiums but I’m super happy from where I came from at the beginning of the season barely being able to ride my bike, to being where I need to be now. I believed I could do it and I’m stoked.

Justin Barcia (Monster Energy Yamaha Factory Racing) – 20th:
This was not how I wanted to end the Supercross season. I’m going to put that behind me and focus on the outdoors. Looking at the positives, we learned a lot in Salt Lake City. It was my most consistent Supercross season on the 450. I’m looking forward to some time at home and then getting back to work.

Aaron Plessinger (Monster Energy Yamaha Factory Racing) – 11th:
I was in a funk pretty much all day. I got off to a really bad start in the main event. It was dry and really slick. I was dead last going into the first corner and then started picking off guys one by one and made it to 11th. I was catching [Chad] Reed a little bit here and there, but he would pull away from me and we were pretty much the same speed from the time I caught him until we finished the main. I ended up 11th, which is obviously not where I wanted to be, but we are over Supercross and on to outdoors, so I am pumped on that!

Eli Tomac (Monster Energy Kawasaki) – Fifth:
This is just so cool, to win my first 450SX title. This championship is literally the last carrot that I was chasing, especially after coming up short for the past three years. I have worked so hard for this and can’t thank the Monster Energy Kawasaki team and entire company enough for all of their support and for helping me finally achieve this goal for myself and everyone who is a part of this program. It has been a long time coming and we set ourselves up for success starting from day one of this series and just kept fighting till the end.

Broc Tickle (JGRMX Yoshimura Suzuki) – Sixth:
Today was a huge step in the right direction for me. I started the day off better in practice and improved throughout practice and qualifying. In the heat, I grabbed my first holeshot in a long time. I started sixth in the main and managed to stay strong and steady – this was huge for me and the JGR squad. Thank you to everyone who has made the Salt Lake City racing possible and for the support in getting me back to where I belong.

Fredrik Noren (JGRMX Yoshimura Suzuki) – 19th:
My speed is getting better and my ankle is improving, which is good,” said Noren. “I’m happy to finish the last round safe. It will be great to now be able to work on my endurance and speed going into the outdoors 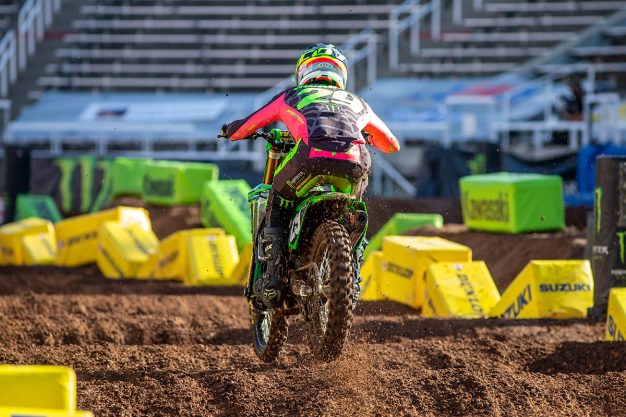 Shane McElrath (Monster Energy Star Yamaha Racing) – Second:
I’m pretty disappointed that I didn’t get the championship this year, but since I’ve been on this team I’ve learned so much and grown so much as a person and a rider. I’m learning from my mistakes and looking forward to moving on to the outdoors.

Colt Nichols (Monster Energy Star Yamaha Racing) – DNS:
The day was going well and then I got together with Chase [Sexton] in the heat race. I just misjudged how close he actually was to me and he was already committed to what he was doing. He ended up landing on my hand and got me a little beat up. I’m going to get it checked out and hopefully will be all good.
Dylan Ferrandis (Monster Energy Star Yamaha Racing) – Fourth:
I’m pretty pumped about the way I ended this season, even though I had a very difficult day. It was the most difficult day of my life. There was so much emotion today after having to win the LCQ. I’ve never had to race an LCQ in my four years of Supercross and to have to come through today with the championship on the line, that was tough. I secured my championship in the main to get back-to-back 250SX West titles. It is more than a dream come true. Thanks to my team, my wife and my trainer DV [David Vuillemin]. I’m so happy!

Justin Cooper (Monster Energy Star Yamaha Racing) – Seventh:
It was a pretty good day until the main. A rider cross jumped me and put me on the ground pretty hard. On the restart I didn’t get a good start and I just kind of rode the race out. I didn’t really have it in me after the crash. I’m going to put it all behind me. I’m excited for the outdoors.

Jalek Swoll (Rockstar Energy Husqvarna Factory Racing) – 19th:
I felt good going into the main event. I almost got holeshot and was riding pretty good, I think, and they threw out a red flag and it was all downhill from there. I got really close to my teammate in the restart and pulled my shoulder in a weird way. I was off-balance the whole race and then I made a mistake and crashed on my own. It was a tough race but my rookie season is in the books and I’m ready for outdoors.

Michael Mosiman (Rockstar Energy Husqvarna Factory Racing) – Third:
I’m really proud of the team, we made some adjustments during the week and I felt comfortable straight out the gate. The heat was chaos, I got into it with Forkner and my elbow went into his rear tire and I couldn’t feel my hand. I managed a good race in the main and ended up with a third. Overall, solid season and looking to build for this coming year.”

Austin Forkner (Monster Energy Pro Circuit Kawasaki) – DNF:
I was feeling great today and we were in the hunt for the championship. Unfortunately, I made a mistake that really cost me. It’s too bad the season had to end this way but that’s the way racing goes sometimes. I’m really proud of myself and the entire Monster Energy Pro Circuit Kawasaki team for our fight and just wish it could’ve turned out another way.

Cameron McAdoo (Monster Energy Pro Circuit Kawasaki) – 11th:
Although we didn’t finish where we wanted to, it was a good day overall. I felt good throughout the day, my KX250 was dialed and I felt like I was riding really well. I had some great starts and even started to lead in the main before the red flag came out. It’s really too bad about Austin, but I believe the restart to the race is really what got to me. I got another great start but ran out of steam there at the end. It got really hard for me to breathe and all I could think about was just finishing the race to my best ability. It was a great season and the team, and I will get back to work to take on the outdoors.

Alex Martin (JGRMX Yoshimura Suzuki) – 16th:
Racing the last round of Salt Lake City was touch and go for me all week. I was managing an injury fairly well, but made a mistake in the restart of the main and lost a lot of ground trying to recover. It was a frustrating way to end the series, but I’m very motivated to get myself and the team up front where we belong in the upcoming outdoor series.