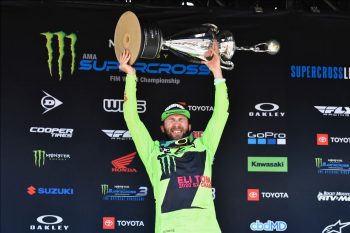 Tomac kicked off the finale in a familiar way by topping the charts in qualifying in the 450SX class with a fastest lap of 49.438. After tying with the competition for first place in the final qualifying session, the AMA had to go to ten-thousandths of a second to determine who was fastest, which landed Tomac his fifth pole position of the season.

Keeping the momentum rolling into 450SX Heat 2, Tomac got off to a great start in fifth and remained there for more than half of the race. As the time ran down, Tomac began to make his move on arguably the most technical track raced in Utah and passed two other riders to finish third.

As the gate dropped on the final 450SX Main Event of the 2020 season, Tomac got tangled with riders in Turn 1 but was able to avoid any kind of disaster, starting in 10th. Maintaining his cool, calm and collected demeanor, Tomac began to put in laps and gradually pick off riders, making his way to sixth by Lap 9. Tomac made one last pass a few laps later to cross the finish line in fifth, earning Kawasaki’s 11th 450SX championship as well as the 2020 Manufacturers Cup award.

The day was a victory for all as Monster Energy Supercross is the first professional sport to complete their series after being suspended due to the global pandemic. Tomac has expressed many times that the silver lining of the time off was being able to see the birth of his daughter and he is now the first rider in history to win the title as a father, making it even more special to earn on Father’s Day.

Eli Tomac: “This is just so cool, to win my first 450SX title. This championship is literally the last carrot that I was chasing, especially after coming up short for the past three years. I have worked so hard for this and can’t thank the Monster Energy Kawasaki team and entire company enough for all of their support and for helping me finally achieve this goal for myself and everyone who is a part of this program. It has been a long time coming and we set ourselves up for success starting from day one of this series and just kept fighting till the end.”