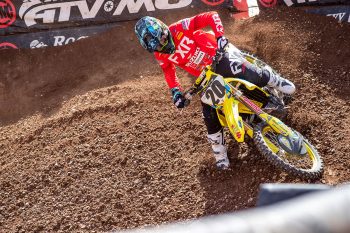 A season-best sixth-place finish for Broc Tickle at the Monster Energy Supercross finals marked his strongest performance since returning to competition, delivering the JGRMX Yoshimura Suzuki team its best 450SX result of the year.

Tickle has endured a difficult comeback since his two-year suspension ended in February at the Tampa round, marred by injury including a fractured hand sustained in the opening race at Salt Lake City.

Despite being forced to miss the first seven races of 2020, Tickle was drafted into the JGRMX team and immediately impressed with 12th position on return. He matched that result again at SLC5, however, the final round was a major breakthrough for him both in terms of performance and the end result.

“Today was a huge step in the right direction for me,” Tickle reflected. “I started the day off better in practice and improved throughout practice and qualifying. In the heat I grabbed my first holeshot in a long time.

“I started sixth in the main and managed to stay strong and steady – this was huge for me and the JGR squad. Thank you to everyone who has made the Salt Lake City racing possible and for the support in getting me back to where I belong.”

Tickle managed to climb into 20th overall in the final championship standings, now setting his sights on Lucas Oil Pro Motocross where it’s expected that he will remain Suzuki-mounted. It’s not clear whether he will continue to be an internal part of the JGRMX team.