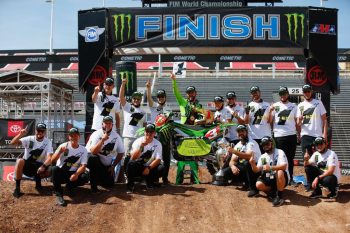 Monster Energy Kawasaki rider Eli Tomac captured his first Monster Energy AMA Supercross, an FIM World Championship at the final round of the series in Salt Lake City, Utah on Sunday. Tomac dominated the series on his KX450 by winning seven out of the 17 races this season.

Furthermore, Tomac cements his legacy as an elite champion, becoming only the fifth rider in history to win titles in both the 450SX and 250SX classes as well as AMA Pro Motocross Championships in both classes. Tomac has found great success throughout his racing career in the state of Utah as he wrapped up both a 250SX and 250MX title in Utah, and now a 450SX title. This marks the 11th 450SX championship for Kawasaki in Monster Energy Supercross.

“This is just unbelievable, especially under all of the circumstances. I just look back at my entire lifetime of riding, the wins, the losses, and overcoming it all with the Monster Energy Kawasaki team. There was a point in time we didn’t know if we would be able to get back to racing and here we are finishing business. I am so incredibly happy and proud we finally did it, it’s unbelievable.”