Final round result comes following a major scare in practice. 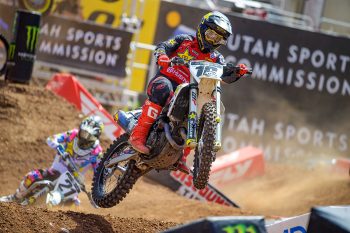 Leading an all-Husqvarna podium in Salt Lake City 7 marked the first victory of Zach Osborne’s 450SX career to complete what was a solid final seven rounds in Utah.

The two-time 250SX East champion has battled injury since transitioning into the premier class last year, but managed to achieve four podiums across the final stretch at Rice-Eccles Stadium.

Osborne overcome a major scare by crashing heavily in final qualifying – cleared of internal injuries prior to the main program – and then was able to win the final round of Monster Energy Supercross despite losing a side-plate in the final stages.

It was an emotional result for the Rockstar Energy Husqvarna team after Husqvarna Motorcycles employee Scott Burtness sadly lost his life earlier in the week. Osborne and the team dedicated their result to Burtness.

“I feel amazing,” Osborne beamed. “That was a good race for all three of us Rockstar Energy Husqvarna Factory Racing bikes. I actually lost a side panel about six minutes ago, so I was done if Jason didn’t lose the seat there. I got a little bit lucky, but man, it feels amazing to get some results here at the end of the season for my team.

“I just have to give it up to the good lord for keeping me safe. I had a big one in practice this morning, basically missed the whole second practice. That’s normally a game-changer on race day, but I was able to turn it around. And we lost a really valued co-worker at Husky yesterday – this one’s for him.”

It was a 1-2-3 podium sweep for Rockstar Energy Husqvarna, with Osborne leading 2018 champion Jason Anderson and Dean Wilson. After entering the SLC rounds ranked 14th in the standings, Osborne climbed to sixth overall by the series completion.