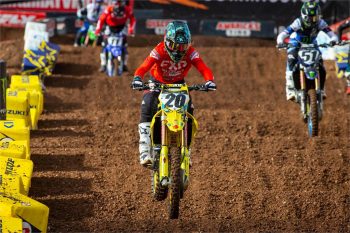 Closing a challenging series for the 2020 Monster Energy AMA/ FIM World Supercross series due to the Coronavirus COVID-19 pandemic, the JGRMX/ Yoshimura/ Suzuki Racing team wrapped-up the weekend’s Salt Lake City 17th round at Rice Eccles Stadium in Utah, USA, on a positive.

Broc Tickle scored sixth-place aboard his Suzuki RM-Z450 in the 450 Main Event, while teammate Fredrik Noren also earned his season-best race finish. Alex Martin also had a strong run on his Suzuki RM-Z250 to claim sixth in the 250 West Championship points standings.

The day started great for Tickle, who grabbed the holeshot in heat one on his JGR-tuned Suzuki and earned a direct transfer into the Main Event. He continued that momentum with another strong start in the Main and battled into a top-five position showing marked improvement with his healing hand injury. A sixth-place finish allowed Tickle, with fewer than half of the season’s races contested, to finish the series in the top-20 in the final points standings.

Said Tickle: “Today was a huge step in the right direction for me. I started the day off better in practice and improved throughout practice and qualifying. In the heat, I grabbed my first holeshot in a long time. I started sixth in the Main and managed to stay strong and steady. This was huge for me and the JGR squad. Thank you to everyone who has made the Salt Lake City racing possible and for the support in getting me back to where I belong.”

Team Manager Jeremy Albrecht said: “I’m really happy with how Broc rode all day. He was better in qualifying, starts, and results. The sixth-place finish in the Main was a really great ride, and even more impressive considering the injury he had to ride through.”

Fredrik Noren also capped the season with his best 2020 finish. The difficult track conditions didn’t prevent the Swedish rider from earning a smooth transfer into the Main through the LCQ. Making the best of a poor starting position, Noren managed to nab his best finish of the year.

“My speed is getting better and my ankle is improving, which is good,” said Noren. “I’m happy to finish the last round safe. It will be great to now be able to work on my endurance and speed going into the outdoors.”

Martin was pushing to recover from a tailbone injury suffered at round 15, but unfortunately, a heat race pile-up prevented him from finishing the season in the top-five position he had held in the points standings. ‘A-Mart’ was forced to ride the LCQ, where he transferred easily, but was relegated to a late gate pick. Although he didn’t finish where expected, Martin managed to end the season with a solid sixth-place in the overall points standings.

Said Martin: “Racing the last round of Salt Lake City was touch and go for me all week. I was managing an injury fairly well but made a mistake in the re-start of the Main and lost a lot of ground trying to recover. It was a frustrating way to end the series, but I’m very motivated to get myself and the team up front where we belong in the upcoming outdoor series.”

“Alex had some tough luck in the heat getting stuck in a pile-up and forcing him to go to the LCQ,” added Albrecht. “He rode well and was looking forward to the Main Event. A bad gate pick was not ideal for this style of start. He stayed out and fought for every position to finish the series the best he could. Overall, Alex finished sixth in the points and is focused on doing better outdoors.”