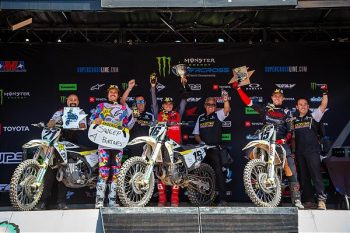 It was a historic day for the Rockstar Energy Husqvarna Factory Racing Team as the brand swept the 450SX podium at the final round of the 2020 AMA Supercross World Championship Series in Salt Lake City. With first-time 450SX winner Zach Osborne at the helm, teammates Jason Anderson and Dean Wilson contributed to the trio leading all 25 laps of Sunday’s Main Event to end the season on a high note in Utah. Additionally, team rider Michael Mosiman topped off the team’s successful day with a podium finish in the highly-competitive 250SX East/West Showdown Main Event.

Osborne suffered a hard crash during the day’s qualifying, where he was able to salvage 15th in the combined sessions. He bounced back in 450SX Heat 2, where he grabbed a second-place start and maintained a steady pace to secure a second-place transfer into the Main Event. Credited with the Main Event holeshot, Osborne had a great jump off the line as he battled out front early on. He engaged in a three-way battle for the lead behind his teammates Wilson and Anderson early on, patiently waiting for his time to make a move.

On lap eight, he passed Wilson for second and from there he focused on reeling in the leader of Anderson ahead. With four laps to go, Osborne overtook the lead and he never looked back as he bested his teammate by three seconds for the win. Osborne, who ended the season with four podiums in the last six rounds, finished sixth overall in the 450SX Championship despite missing two rounds mid-season due to injury.

“That was a great race for all three of us. It feels amazing to get some results here at the end of the season for my team,” Osborne said. “It was an incredible day and I’m just really proud for the whole team to be on the podium. It’s been an amazing trip in Salt Lake City.”

In 450SX Heat 1, Anderson got off to a fourth-place start and he climbed up to second by lap two. He worked his way into the lead halfway through and he held strong to capture the heat race victory. He got off to a great start in the Main Event, where he mixed it up for the lead with his teammates early on. He battled in second behind Wilson for the first six laps before making his way into the lead on lap seven.

The 2018 450SX Champion held off a hard-charging duo behind him for 15 laps, leading the most laps of the race, before Osborne took over with four to go. Anderson continued to push all the way to the checkers, ultimately securing a runner-up finish at the finale. Anderson concluded the 2020 season in fourth overall, claiming five podium finishes and seven top-five finishes.

“All-in-all, it was a good trip in Utah and ending it on a high note with all three of us on the podium was good,” Anderson said. “I enjoyed Salt Lake City, so let’s do this again and get ready to go for outdoors.”

Wilson, the fourth-place qualifier, lined up in 450SX Heat 1 where he got off to an eighth-place start. He battled his way up to ultimately secure a sixth-place transfer spot. In the Main Event, Wilson got off to a great start as he battled his teammate Osborne for the official holeshot. He quickly assumed the lead position on the opening lap where he set the pace early on, leading the first six laps of the race.

Anderson took over on lap seven and Osborne followed suit, putting Wilson in a new battle for second-place. He maintained a great pace for the remainder of the race to claim his first podium finish of the season by finishing only 5.3 seconds back from the leader. Wilson rounded out the 2020 season eighth overall in points, claiming 11 top-10 finishes throughout the season.

“I was a bit tight running up front but I just tried to play it cool and smart, Wilson said. “My goal was to get on the box and that’s what I did. I’m stoked to get a third place, lead some laps and end this SX season the way I wanted to. I would have liked to have more podiums but I’m super happy from where I came from at the beginning of the season barely being able to ride my bike, to being where I need to be now. I believed I could do it and I’m stoked.”

It was the culmination of the 250SX Eastern and Western Regional Championships on Sunday and the Rockstar Energy Husqvarna Factory Racing Team represented both coasts. In the 250SX West Heat, Mosiman got off to a fourth-place start and he worked his way into third by lap two. He got tangled with another rider and dropped back to ultimately secure a seventh-place transfer. In the 250SX East/West Showdown, Mosiman got off to a top-10 start and he slowly climbed his way into the top-five just before the halfway point.

He focused his sights on a podium position, making his move into third on lap 12. With a strong finish, Mosiman raced his way to his second podium of the season. After nine rounds, Mosiman concluded the 250SX West Championship in fifth overall with five podium finishes in addition to a pair of podiums.

“I’m really proud of the team, we made some adjustments during the week and I felt comfortable straight out the gate,” Mosiman said.“The heat was chaos, I got into it with Forkner and my elbow went into his rear tire and I couldn’t feel my hand. I managed a good race in the Main and ended up with a third. Overall, solid season and looking to build for this coming year.”

In the 250SX East Heat, Jalek Swoll put himself into third on the opening lap. He bounced around inside the top-five before securing a fourth-place transfer into the Main Event. In the 250SX East/West Showdown, Swoll got off to a great start in second as he mixed it up in the top-five before the red flag flew. Upon the restart, he got shuffled back to a top-15 position after tweaking his shoulder during the race. From there, Swoll worked hard to make his way back through the pack but a crash set him back even further and he was unable to recover, ultimately finishing 19th in the race. Swoll ended his rookie season in the 250SX East division seventh overall, with six top-10 finishes throughout the year.

“I felt good going into the Main Event,” Swoll said. “I almost got holeshot and was riding pretty good, I think, and they threw out a red flag and it was all downhill from there. I got really close to my teammate in the restart and pulled my shoulder in a weird way. I was off-balance the whole race and then I made a mistake and crashed on my own. It was a tough race but my rookie season is in the books and I’m ready for outdoors.”