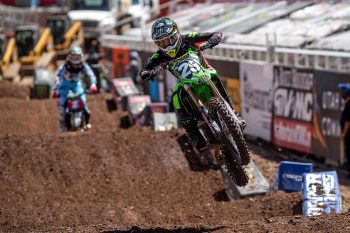 Monster Energy Pro Circuit Kawasaki’s Cameron McAdoo and Austin Forkner didn’t have the day they were looking for at the final Supercross round of the season, finishing 10th and 21st, respectively. The team will now get almost a month off before the start of the Pro Motocross Series on July 18 in Crawfordsville, Indiana.

The day started well for McAdoo who claimed a fourth-place in the Western Regional heat race leading into the Showdown Main Event. The main event ended up having a full restart following a red flag and McAdoo grabbed a great start in fourth. He was running with the front pack but fell back a few spots to seventh before going down on the final lap and regrouping to finish 10th.

“This wasn’t really how we wanted to end the season, but this year has already been filled with highs and lows and it’s all a part of the process,” said McAdoo. “If we didn’t have the hard days, we wouldn’t know how to get better. I’m ready to finally start focusing on outdoors and see where that season goes for us.”

Coming into the final race, Forkner had collected four wins on the season and was out to prove he is a leader in the class. He mathematically had a chance at the championship and put himself in a good position after a third-place finish in his heat race. Unfortunately, he went down a few laps into the main event and was unable to finish the race after going down. Forkner was taken to a local hospital for observation.