Assorted racer comments following the 16th round of the season.

In Quotebook, a selection of riders detail round 16 of the 2020 Monster Energy Supercross, an FIM World Championship, at Salt Lake City. 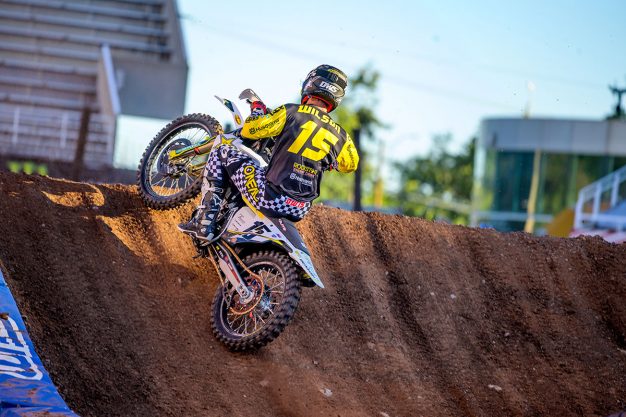 Cooper Webb (Red Bull KTM Factory Racing) – First:
We were all really close in speed, not a lot separating. I fixed the whoops about halfway – I think that’s what was holding me back – and I started hitting them really well. It was a tight race between us four and the whole race it seemed like a lot of pressure between us all because we weren’t making many mistakes. I’m sure it was a fun race for the fans to watch and it was a fun race to win, for sure.

Jason Anderson (Rockstar Energy Husqvarna Factory Racing) – Fifth:
It felt really good to start the day off with P1 in practice and get a heat race win. In the main, the difference between me and the leader was seven seconds and there were like five guys within that battle, so it was good. All-in-all, I felt good all day and we’re ready to get up there and battle for a win.

Zach Osborne (Rockstar Energy Husqvarna Factory Racing) – Third:
The whole time I was in the lead, I was just trying to set a new personal best on laps led. I was doing something I’ve never done before, so I’m happy with my ride. I tightened up a little bit at the end, this was one of the harder main events I’ve ever done with the altitude and just the intensity was way up there.”

Dean Wilson (Rockstar Energy Husqvarna Factory Racing) – 13th:
There were some good parts and some bad parts of today. I’m stoked on the heat race win but I made an adjustment that I felt would be a benefit for the main event and I just really struggled out there. We’re healthy and taking away a lot of positives into the last round on Sunday.

Justin Barcia (Monster Energy Yamaha Factory Racing) – Ninth:
Unfortunately the other day I woke up and my neck was fully stuck and I couldn’t move it, so I only had a day to try to get that better and it really didn’t get better. The beginning of the day did not go well for me at all. I just rode around trying to get used to the track and loosen up my neck a bit. Luckily, it got a little bit better throughout the day. The heat race went pretty well, I ended up fourth in that, but it was another one of those not so great starts again in the main event. I got a little tangled up in the second corner and then ended up fighting my way back from 16th to ninth. I think you can make excuses about not being able to go faster on the track because it was one-lined, but I just didn’t have any more speed than that. I got through it and I’m healthy, I’m just going to keep trying to loosen up my neck. I’m looking forward to Sunday and hopefully will get a run on a solid result.

Aaron Plessinger (Monster Energy Yamaha Factory Racing) – 14th:
I had a great heat race, a great qualifying, I just couldn’t put it together for the main. I got an okay start. The track was pretty slick and I just got held up by a lot of people and I just rode tight. Yeah, the bike’s starting to work better, but I just need to put it together. There’s no excuses – I shouldn’t be finishing outside the top 10 or even the top five. I just have to put one race together. I get one more shot this year, I’ve got to send it. I just want to get out there and ride my dirt bike, have fun and do the best I can at the last race.

Eli Tomac (Monster Energy Kawasaki) – Second:
I felt better on the track today in regard to making passes. I was pushing hard, as hard as I could. I made it up to the front of the pack, but couldn’t quite make it happen. Overall, it was a good day for Monster Energy Kawasaki. Although we always want to win, we’ll take a second-place finish and my KX450 showed it has the power to push forward. I’ll take the next few days to relax and recover and then be ready to wrap this championship up on Sunday.

Ken Roczen (Team Honda HRC) – Fourth:
The second-to-last race in Salt Lake City was a good one. I’d rather have it this way and put in a hard effort and not be good enough and get beat than have too many issues and drop off completely. I just wasn’t fast enough tonight. I tried really hard to at least get on the podium, and we were close, but just not enough, unfortunately. We put in a good charge. We’re going to come back in the last race and try to get to the very top step one last time for 2020. Overall, it was a very good effort from the team and on my side, especially after a heat race where I got parked because I had a big rut in my line and didn’t have the greatest gate pick. We put in a good fight and ended up fourth for the night. It’s not exactly the result we wanted in the end, but it was a great fight and that’s all we can ask for.

Justin Brayton (Team Honda HRC) – Sixth:
This was the best one yet for me. I had a great start in the main and ran second for a while. I was running up front and doing the laps that I wanted to do, running good lap times, racing with the guys I feel like I should be racing with. I’m pretty proud of this one. Sixth isn’t amazing, but overall from what I’ve been doing—starting 13th or 14th and coming to eighth, it’s much better to start second and run there for a while and get used to that pace again, then get passed by a few of the best guys in the world and end up sixth. Overall it was a good night for me. One to go, let’s do it!

Broc Tickle (JGRMX Yoshimura Suzuki) – 16th:
Today was positive for me. We made some adjustments to the bike to be ready as the track deteriorated and we went in the right direction. Results-wise, it was not what we were looking for, but we are making progress. Overall, I had a solid performance. 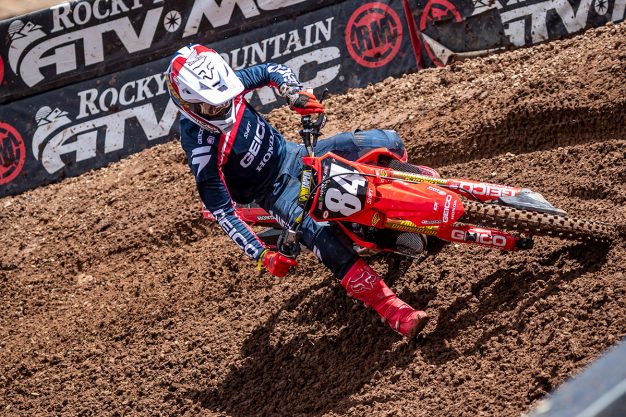 Chase Sexton (Geico Honda) – First:
I just knew I was good in that rhythm section and I knew that I could get close to him. I was like, alright, I’ve got to make a pass here. It was good. I made it. It was pretty aggressive, but also I didn’t want to give Shane another chance to get back on me in the next corner, so I had to make it stick. From there on I just kind of tried to sprint away and hit my marks as good as I can while going through lappers. The track was really good and I enjoyed that main event.

Jo Shimoda (Geico Honda) – Fifth:
I was feeling good all day, fourth in timed qualifying, but I did have one crash. Good start in the heat race and the first few laps I was close to Shane. I finished second. For the main event I started around 10th and could only catch up to fifth for the day. It was better than the last few races, though. Just little bit better start and I really focused on the first two turns to get through. The last few races I’ve been frustrated because I didn’t get to ride 100 percent with all the crashes.

Shane McElrath (Monster Energy Star Yamaha Racing) – Second:
Man, second place isn’t bad, except in this situation. I really needed a win tonight and unfortunately came up short. I was just a little behind all day today, but I’m fired up and I’m making a statement at the last round

Colt Nichols (Monster Energy Star Yamaha Racing) – Third:
Overall it was a good race to get third and on the podium, I just had a bad start and that really hurt me. I also didn’t have the intensity that I needed, so I’m a little bummed. I felt like I left a little bit out there, but it’s all good. I have one more race on Sunday and I’m ready to do battle with the guys from the east and west.

Jalek Swoll (Rockstar Energy Husqvarna Factory Racing) – 14th:
The day started out good, my speed felt good and I got everything down early. The main event was chaotic, but I’m head-up right now, looking forward to putting in a good result on Sunday and ending the SX season on a good note.