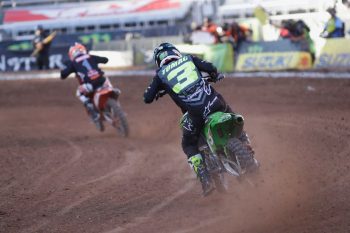 The penultimate round of the 2020 Monster Energy AMA Supercross, an FIM World Championship saw an action-packed 450SX Main Event as Monster Energy Kawasaki rider Eli Tomac charged from last place in the first corner to finish in second place and maintain a 22-point championship lead heading into the final round of the series on Sunday, June 21st.

After kicking the day off qualifying with the second fastest lap time (43.539), Tomac took that speed and confidence with him into 450SX Heat 1. As the gate dropped, the championship points leader charged onto a track layout similar to the previous race on Sunday, featuring a long, straight-away that eventually turns into a flat left-hand corner.

Challenged with the exceptionally slick flat corners, Tomac found himself mid-pack and his work cut out for him. The Colorado native made his way to third by the halfway point of the race but didn’t stop there. Gunning for the front in order to fight for the best gate pick in the main event, Tomac made another pass for second where he would go on to finish as the time ran out.

As the gate dropped for the 450SX Main Event, Tomac shot out of the gate but was quickly caught up in traffic on the inside of the first turn forcing him to the back of the 22-rider field. He immediately began to charge to the front, methodically passing 20 riders aboard his KX450 to finish in second place.

Put to the test, Tomac laid it all out on the track as he pushed the limits, especially in one rhythm section, where he was one of few to utilize a line that included jumping a technical triple-triple combination to pass his competitors. Tomac will now look to secure his first 450SX championship at the series finale on Sunday by finishing at least 19th in the 22-rider field.

Eli Tomac: “I felt better on the track today in regard to making passes. I was pushing hard, as hard as I could. I made it up to the front of the pack but couldn’t quite make it happen. Overall, it was a good day for Monster Energy Kawasaki. Although we always want to win, we’ll take a second-place finish and my KX450 showed it has the power to push forward. I’ll take the next few days to relax and recover, and then be ready to wrap this championship up on Sunday.”