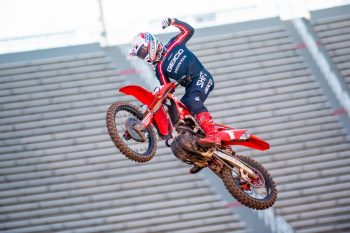 It was a pivotal round in the fight for the AMA Supercross 250SX East Championship, and GEICO Honda’s Chase Sexton rose to the occasion to score the victory. The win marks two-straight victories for Sexton and four for the season, and stretches his points lead to six with one race remaining, this Sunday’s East/West Showdown finale.

Most importantly, Sexton was able to catch and pass championship rival Shane McElrath to get the lead and grab the win. Beyond the points standings, it establishes Sexton’s speed leading into the final race of the supercross season.

“I just knew I was good in that rhythm section and I knew that I could get close to him,” said Sexton of closing on McElrath. “I was like, all right, I’ve got to make a pass here. It was good. I made it. It was pretty aggressive, but also I didn’t want to give Shane another chance to get back on me in the next corner, so I had to make it stick. From there on I just kind of tried to sprint away and hit my marks as good as I can while going through lappers. The track was really good and I enjoyed that main event.”

It was also enjoyable for Jo Shimoda, who rebounded from a string of crashes in previous rounds to grab a solid fifth, his first top five since Atlanta five races ago. Shimoda is now the top-ranked rookie in the 250SX East Championship, at fourth in the standings.

“Yeah I was feeling good all day, fourth in timed qualifying, but I did have one crash,” said Shimoda. “Good start in the heat race and the first few laps I was close to Shane [McElrath]. I finished second. For [the] main event I started around 10th and could only catch up to fifth for the day. It was better than the last few races, though. Just little bit better start and I really focused on the first two turns to get through. The last few races I’ve been frustrated because I didn’t get to ride 100 percent with all the crashes.”

Sexton’s six-point lead gives him a buffer going into the finale, which is the only supercross race in 2020 that will feature riders from both 250SX West and East.

“I’ve been looking forward to this East/West Showdown all year,” said Sexton. “I want to race everybody and I think we were supposed to have two this year and we only got to race one. For me, I want to go out there and have that offensive mentality and put myself in a good position. Hopefully we can run up there and try and win the race. I think I want to prove some stuff on Sunday. I feel like tonight I rode well, so hopefully carry that into Sunday. I want to win that race. I’m looking forward to getting out there and mixing it up with the rest of the crew.”