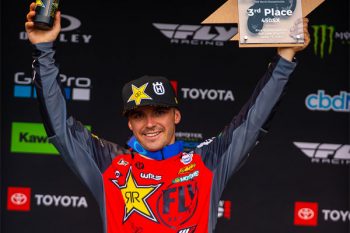 Rockstar Energy Husqvarna Factory Racing Team’s Zach Osborne continues to make big strides in the 2020 AMA Supercross World Championship Series as he led a career-best 22 laps in Wednesday’s 450SX Main Event to ultimately secure a third-place podium finish inside Rice-Eccles Stadium. Additionally, his teammates Jason Anderson and Dean Wilson gave the brand a heat-race sweep in the 450SX division as they each topped their respective heat races at Round 16 in Salt Lake City.

Osborne didn’t have the most favorable start to the day as he experienced some struggles in 450SX Heat 2 that ultimately led him to a sixth-place transfer into the Main Event. However, he quickly turned things around in the Main Event as he captured the holeshot and early lead in the highly-competitive class. With a championship battle taking place just behind him, Osborne held his composure out front and led the first 22 laps of the Main Event. The championship hopefuls got past Osborne on lap 23 and from there he held strong to secure his third podium finish of the Salt Lake series.

“The whole time I was in the lead, I was just trying to set a new personal best on laps led. I was doing something I’ve never done before, so I’m happy with my ride,” Osborne said. “I tightened up a little bit at the end, this was one of the harder Main Events I’ve ever done with the altitude and just the intensity was way up there.”

Following a tough night on Sunday, 2018 450SX Champion Jason Anderson bounced back with vengeance as he claimed the fastest 450SX lap time in qualifying. He kept the momentum rolling into 450SX Heat 2, where he shot off the line to grab a favorable position off the start. He assumed the early lead and never looked back, leading all 10 laps to claim the heat race victory. In the Main Event, Anderson got a top-10 start and he worked his way into the top-five by lap four. He diced back-and-forth with the lead group for a majority of the race, where he finished only 2.45 seconds off the podium in fifth.

“It felt really good to start the day off with P1 in practice and get a heat race win,” Anderson said. “In the Main, the difference between me and the leader was seven seconds and there were like five guys within that battle, so it was good. All-in-all, I felt good all day and we’re ready to get up there and battle for a win.”

Dean Wilson, the fourth-place qualifier, got a top-five start in 450SX Heat 2 and he battled his way up to second by lap three. He passed his teammate, Osborne, for the lead on lap four and from there he put forth an impressive performance to hold off 450SX points leader, Eli Tomac, and secure his first heat race victory of the season. In the Main Event, Wilson didn’t get the most favorable start as he rounded the opening lap in 15th. He put his head down and battled just outside the top-10 for the remainder of the race, ultimately finishing 13th for the night.

“There were some good parts and some bad parts of today,” Wilson said. “I’m stoked on the heat race win but I made an adjustment that I felt would be a benefit for the Main Event and I just really struggled out there. We’re healthy and taking away a lot of positives into the last round on Sunday.”

The 250SX Eastern division returned on Wednesday with team rider Jalek Swoll at the forefront. Swoll got off to a third-place start in 250SX East Heat 1 and he rode a consistent pace to ultimately secure a third-place finish. In the Main Event, Swoll had a rough start as he got tangled with another rider and dropped to dead last on the opening lap. He began making a charge through the pack but he got caught up again and went down in the corner after hitting false neutral. He put his head down and rallied his way back to a 14th place finish.

“The day started out good – my speed felt good and I got everything down early,” Swoll said. “The Main Event was chaotic but I’m head-up right now, looking forward to putting in a good result on Sunday and ending the SX season on a good note.”