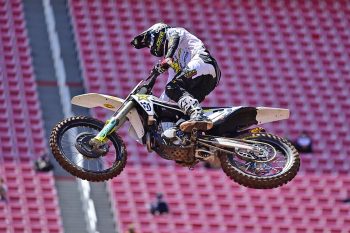 It was Tomac who topped the times earlier and he’s in a strong position to clinch the title tonight at Rice-Eccles Stadium with one round to spare. Third overall this afternoon, however, was Sunday winner Ken Roczen (Team Honda HRC).

The return of 250SX East saw defending champion and points-leader Sexton ride his Geico Honda to the top of the time-sheets at 43.673s.